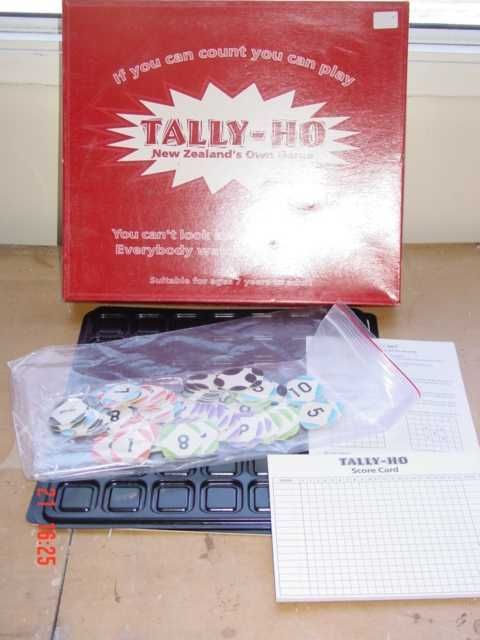 Tally-Ho: for 2-5 players - is a game of chance and observation. Tiles are all face-down on the board to start with, and as each player turns a tile over, points can be scored when certain combinations of numbers or colors are observed by them. Tally-Lo: is a variation of Tally-Ho with the aim o get the lowest score. Pyramid: is a game for one player. The aim is to take down a pyramid of number-tiles, from the bottom, by removing sets of tiles that add up to a specific target number. Can be played at different challenge levels. Elimination: is a game for one player, with Target Numbers. It is played on the Tally-Ho board. the aim is to choose and add up a Chain of tiles, which total the same as the target Number. 50/50 & Hindsight: is a pair of games for one player using all four basic mathematical functions: + - x divided by. It is played with the tiles face down and Hindsight follows, on the same board, with all the tiles turned face up. The aim is to reduce a running total from the starting number of 50 using addition, subtraction, multiplication and division to reach reach zero. Number-Path: is a game for one player who uses the four mathematical functions as above to create an equation along a vertical or horizontal 7 tiles on the Tally-Ho board, where the equation results in the value of the 7th tile.