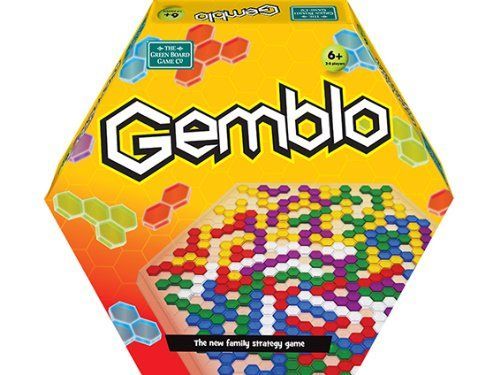 Gemblo is an abstract strategy game with translucent, colored pieces, each of which is made up of one to five hexagons. Each player has an identical set of pieces in a unique color. The goal is to get rid of all of your pieces by placing them on the hexagonal game board. Each piece that you place after the first cannot touch previously-placed pieces of the same color; instead each piece must be a distance of "1" from another piece of the same color, where 1 is the length of a side of one of the small hexagons. Another restriction is that the distance being measured can't directly cross another player's piece, but it can lie at the junction of two pieces. Once all players have placed as many pieces as they can, they count the number of hexagonal units in the pieces they couldn't place, and the player with the lowest score wins. Gemblo supports up to six players. In the two-player version of the game, each player uses two colors of pieces.