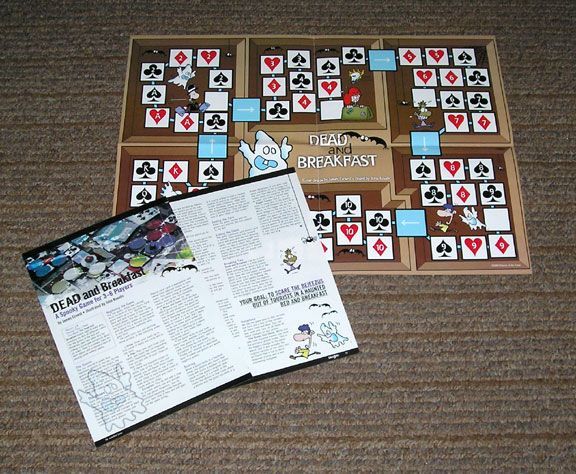 Dead & Breakfast - A Spooky Game for 3 - 6 Players "Your Goal: To Scare the Bejeezus Out of Tourists in a Haunted Bed and Breakfast" Published in the October 2000 Issue of Dragon Magazine (#276). The pull-out board depicts a the 6 rooms of a Bed & Breakfast. Every card of a standard 52-card deck is represented by one of the spaces on the board. Also needed: 8 D6 (including 6 of different colors for the guests of the B&B), plus 2 white dice for rolling; a score pad and pencil; about 30 chips in a unique color for each player; a standard deck of cards without jokers. The 6 colored dice represent the guests, with the number showing representing their level of agitation (each starts at 2, mildly spooked). Each chip represents a ghost that can haunt a room on the board. Different ghosts belong to different players, which is why each player needs their own color of chips. Play: --Draw your hand up to 5 cards. --Play a card and 'haunt' the room containing the card you played. To haunt a room, place a chip of your color on the top of the stack of chips in that room (unless a chip of your color is on the top of the stack), or begin a stack if none exists. You also haunt adjacent rooms that are already haunted (have chips of any color in the room). --Move one guest according to the roll of 2 D6 When a guest lands in a haunted room, points are awarded to the ghosts in that room. Points (equal to the guest's spook level - number on the guest's die) are distributed among the ghosts in that room, with more points going to the top ghost. If a guest stops in a room that is not yet haunted, the player (if any) holding the card for that room can play the card and 'surprise' the guest, scoring points for scaring that guest. Each time the a guest lands on a numbered room, their rank (number on die) is increased by 1. If the guest is a 6, they 'freak out'. Freaked-out guests are worth negative points. Play ends when the last card is played. Player with the most points wins. A few variants are also included in the rules.