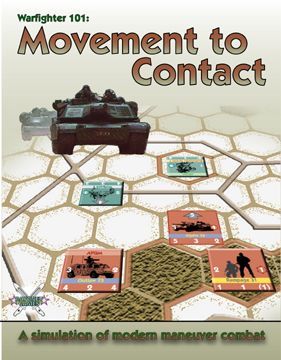 Components: Four pages of color rules, four operations orders, two player aids describing the units, one sheet of mounted 7/8" counters (not die cut) and an 11x17" map (double-sided). Game covers clashes at the National Training Center between a heavy battalion and an OPFOR motor rifle force. Both sides have supporting artillery and helicopter assets attached. Mechanics are straightforward with both players moving and then firing - damage takes effect after combat. Fire is resolved by rolling a handful of dice, counting the hits and then subtracting the target's armor - units may be stunned, forced to retreat, take losses or be killed outright. The advanced rules add a sort of opportunity fire where a unit may interfere with enemy movement by declaring it as a target (provided the enemy is within a certain distance). The Operations Orders set up victory conditions and other effects (such as defensive positions) - thus, in a 2 player game, some information will not be shared between players. A blank template for scenario creation is provided and blank forms may be downloaded from the publisher's website.