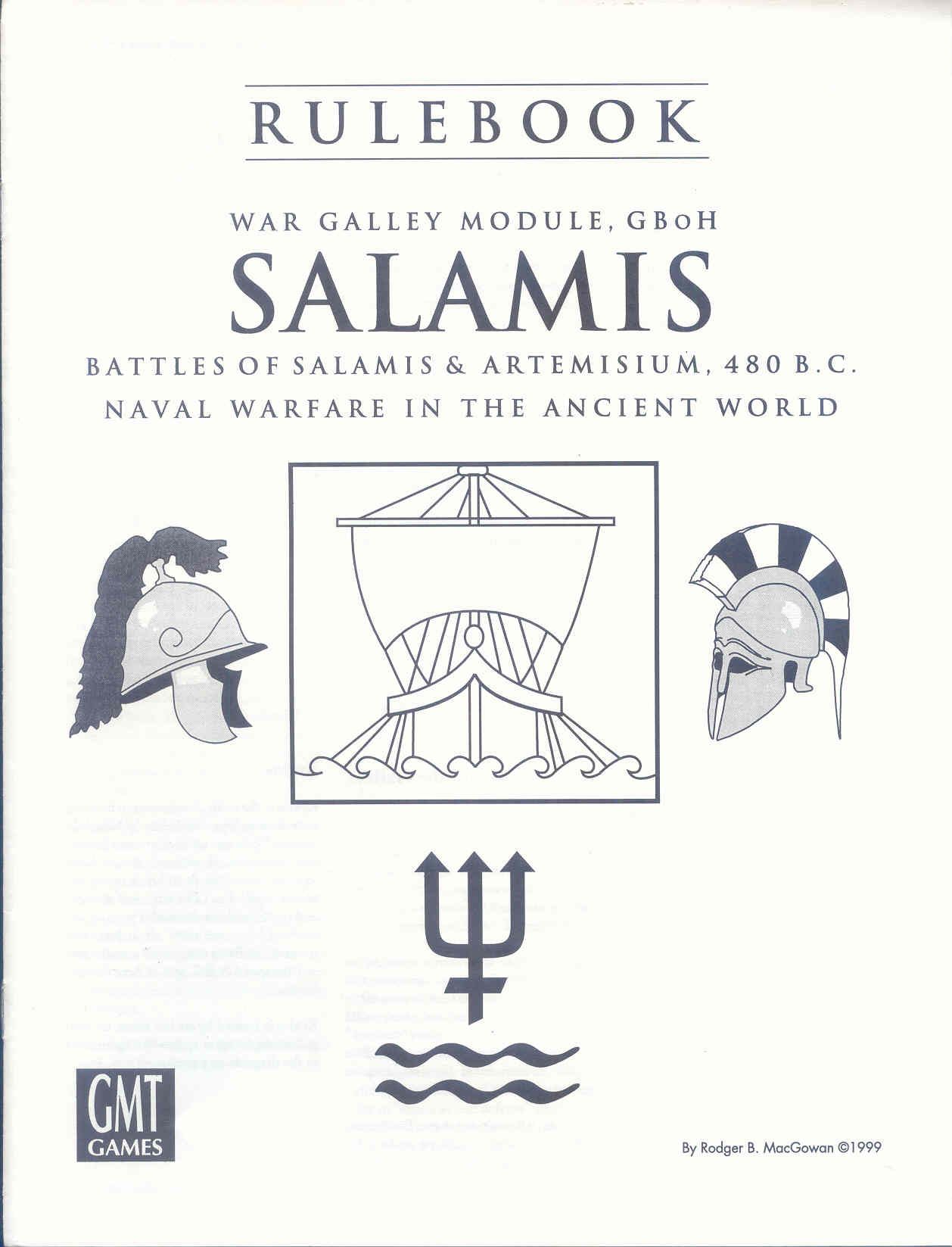 Add-on module for War Galley. From the Publishers website: Salamis, one of the most famous naval battles in history, was a direct result of the Persian need to keep their large, invading army supplied by controlling the sea lanes. With Xerxes' army temporarily delayed at Thermopylae, the Greek fleet, based at Artemisium, some 50 miles or so directly east of Thermopylae, took the opportunity to attempt to stop the Persians from extending this Line of Communications. In a battle that appears to have extended over two or three days, the Greeks managed to eke out a slim tactical win. However, when Thermopylae fell, Themistocles' position became untenable, and the Greek fleet retreated to anchorage in the narrow channel of the Bay of Eleusis, west of Athens, at Salamis. With her naval flanks secured, the Persians rolled into lower Greece, capturing Athens and razing the town. However, to complete his subjugation of Greece, Xerxes had to destroy their fleet. To that end, the Persians sailed to a position south of Salamis. At Artemisium the Greeks had learned that, while their crews and marines were superior, the huge disparity in numbers could be telling. Unless they could neutralize this Persian strength. To that end, Themistocles lured the huge Persian fleet to attack the Greeks in the Bay of Eleusis, whose entrances were so restrictive as to negate any numerical superiority. There were two entrances to the bay. To plug up the western escape hatch, Xerxes dispatched his crack Egyptian squadron. Upon hearing this, Adeimantus and his Corinthians peeled off from the main fleet and sailed to the western mouth to block any Egyptian attempt to gain entrance. This "action" appears to have been a stand off, with both sides "blockading" and not fighting. At the eastern entrance, the Greeks deployed in three lines, along a narrow front of about 1800 yards, thus negating Persian numerical superiority. The Persians entered the bay in three long lines astern, which they then turned into nine lines abreast. The result was a boarding battle, and this was where the Greeks shone. Despite having half the manpower per ship of the Persians, their weaponry, armor and land-based tactics were superior to that of the Persians. And that superiority resulted in a smashing Greek victory. Xerxes retired to Thessaly, to try again the next year. The result was a great Greek victory, on land, at Plataea, followed by the Greek victory that completely cut Persian Lines of Communication, at Mycale.