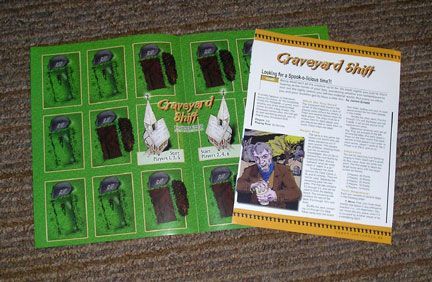 "It usually happens on Halloween, during full moons, on the occasional Friday the Thirteenth or pretty much anytime one of the walking dead comes by with a keg of beer. The Graveyard comes alive, the lost spirits start wandering around and it's time to play Graveyard Shift." Published in the October/November 2000 issue of Games Unplugged Magazine. The board is printed in the magazine; you provide cards, pawns and chips. You try to capture spirits of different values (represented by playing cards) by singing to them (placing chips on them). You move, sing to a spirit (optional), capture a spirit (if you are on it and: you have at least as many chips on it as anyone else and there are at least as many chips on it as its rank OR you have more than half of the card's rank in your own chips) and slide a spirit or line of spirits (optional). New spirits sometimes emerge from from Open Graves.