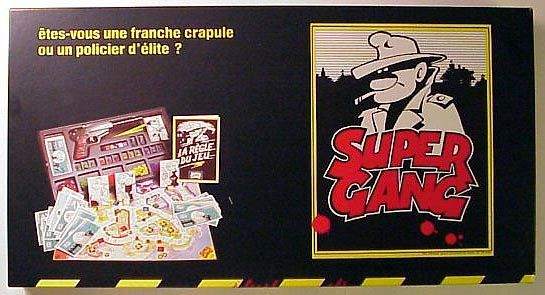 In SuperGang, each player is the godfather of a Mafia team composed of three gangsters: the killer, the dealer and the vamp (femme fatale). The object of the game is to own one complete suburb of the town or be the last surviving gang. A variant propose to a fifth player to have the cops with the objective of sending every gang in prison. You can steal money in the street, deal drugs, vamp the characters of other players, buy/racket/rob shops or kill other characters, shopkeepers or cops. The killer has a bonus to kill, the femme fatale can vamp characters and the dealer is the only one who can deal (of course). Cops are played by the player whose it is the turn (so they move each turn of each player) except in the variant where they are played by a player. They can testify against or arrest gangsters but they can also be bought. Combats (duels) are resolved as follow and make one of the originality of the game. Each involved player rolls dice accordingly to the characters in duel (1D6, 1D6+2 for a killer, 2D6 for a cop) and sums them. The highest roller acts first and is the attacker. A cardboard figure is set up for each participating character in the duel. The attacker shoots with the dart pistol towards the targets with as many darts as the difference between the totals rolled. If he shoots every opposing character, he wins. Then the defender shoots with the same number of darts. This exchange continues until one of the player has shot down all the targets of the other. A face down target mean the character has been killed. Face up means he's only wounded. If all 3 characters of a player are dead at the same time, he loses. He should recruit reinforcements before that happens, though. Avalon Hill made a game named Gangsters with similarities, but they aren't the same game. Note: SuperGang has two versions of the dart pistol. One is a big automatic with a silencer (first version), one is a compact revolver (second version). It changed because of an health regulation problem. The first vesrsion, published in 1985, was made in a little room, the game had a wooden box ! The second one, in 1987, was in paperboard box, with lauren's baby and kids on some square of the board. On the next version, in 1988, they replace laurens and kids by dogs and kid's bycicles. The publisher was afraid of censor, particulary because he was popular among students. The rules was illustrated by Marcel Coucho, by all the other artworks, on the box, the board, the bills and even the miniuatures were made by Gérard Mathieu. This game was a top game from Ludodélire. But after dark stories inside the team, the company sunk and the game never publish again.