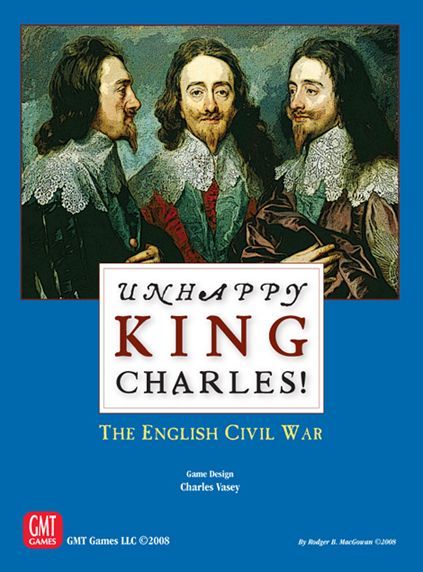 Unhappy King Charles! allows two players to decide whether Commons or Cavalier shall rule in England. Both seek to establish control over the country and of its economic structures. They seek not only to defeat their opponents in battle but also to seize control of the local government of England and Wales. The game is based on We the People, Mark Herman's ingenious game on a later rebellion. As the organization of armies and states was often desultory, the cards do not provide a wide range of choices (as in Paths of Glory). The players in Unhappy King Charles! must make do with what they have. The three decks of cards - Early(1642-1643), Middle(1644) and Late (1645)- have been developed to give the correct feel for the early, middle and late war, based on storyboarding techniques. As befits a Civil War, there is treachery, bravery and stupidity in the events on the cards. Unhappy King Charles! is played over eleven turns, each representing about four months. Brigades of troops are used to form Armies (defined Rule 3) or garrisons of fortresses (Rule 13). Only unled Brigades are on the map; the others are placed on the box of their General on the Command Displays. Generals move on the maps. The Armies of Unhappy King Charles! are temporary massings of troops that have as much to do with feudal armies as modern revolutionaries. With inadequate supply and poor equipment it is not surprising that these armies suffer from continual desertion; and in using them you are going to have to ensure they wander the map collecting fresh recruits. Armies can be over 30,000 for a vital siege or battle or 3,000 tough cavalry under Prince Rupert or Black Tom Fairfax. Movement activations are initiated via a numbered Ops Card, as in We the People, and are based on Army size. The smaller the Army the faster it can move. Movement across the map is by means of Areas joined by movement lines. Control of areas can change during movement if movement points are spent. Non-moving Armies can attempt interception, placing themselves in the path of the moving Army to cause Battle. The game's basic combat unit is the Brigade, which comes in two types: Veterans (value 2) and militia (value 1). Usually militia units must be recruited before veterans of that Region. Each Region's Areas and Brigades use the same basic colour system. Fresh Brigades are received by Recruitment, which is usually limited to the unit's region of origin. Brigades lost in combat are not available for recruitment (though some Event Cards can bring them back); other losses are available. Leader counters are either Generals (with a Strategic and Battle Rating) or Local Notables (Governors of fortresses). Generals can be Field Generals (who operate everywhere) or Regional Generals who can suffer disadvantages when outside their Region. Generals cannot transfer Brigades to other Generals (unless Event Cards require), Brigades remain with their original General until death, dispersal or desertion takes them. Local Notables can transfer Brigades to other friendly Generals. Battles use the Combat Value of Brigades, General's Battle Ratings and Combat Cards to resolve combat. But before any Battle is fought one side can try to Evade (leave the Area) or Disperse (remove itself before combat). Losses in combat are not available for recruitment. Drawn and Decisive Victories will kill Veteran Brigades (if there are any) first. The loser must retreat and can suffer further losses if he retreats through enemy PC Markers. Major and Decisive Victories earn extra Cards. Fortresses cover a wide range of locations. They are ranked by class and must be forced to Surrender by Siege or Event Card. Siege requires the attention of an Army for some time (most Fortresses will require more than one activation to capture). If attacked during that time the besieger can have to abandon the Siege. Assaults can be attempted (at a cost in losses). The game can be won by an Automatic Victory, by one side failing to control enough Areas, or at the end of the eleventh turn. For those players who like some counter-factuals a pack of would-be events is provided. Now players can use Dutch squadrons to blockade the King, summon the Duke of Lorraine, or cause a rising in London. As an Optional Rule, four events are drawn each game and shuffled into the middle and late decks. Components 110 Cards One 34" x 22" colour paper game map Two full-color counter sheets One 28 Page Rulebook One 24 page Playbook Two 11' x 8.5' Player Aid Cards Two Six-sided dice Cover artwork inspired by Sir Anthony van Dyck (1599-1641)