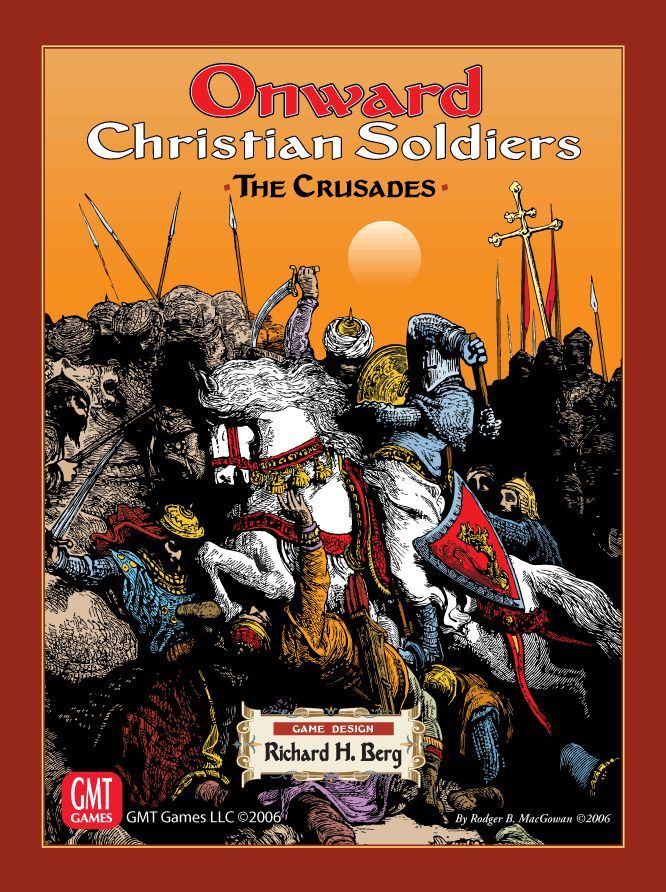 (from GMT website:) Onward Christian Soldiers is Richard Berg's newest strategic level game, this one focused on one of, if not THE, central events in the Middle Ages - The Crusades. It will allow gamers to replay not only the first three Crusades - the only 3 that focused on what we call The Middle East - but with scenarios that range from a 7-player version of the 1st Crusade to a 3rd Crusade scenario that supposes Frederick Barbarossa didn't drown in Turkey and his immense army reached the Kingdom of Jerusalem pretty much intact. Onward Christian Soldiers uses numerous innovative mechanics, including: an Activation system that allows players to choose which leaders/armies they want to use most in a given turn, but not know when they will be available for such use. a Movement system with no Movement Allowances or Costs, but a heavy emphasis on Attrition and the ability of commanders to "keep going". Shop 'til ya Drop . . . Combat mechanics that put a major, detailed emphasis on sieges and ravaging the surrounding areas, but still allow for the predilections of the various armies in field battles (such as the famous Frankish Heavy Cavalry Charge), as well as the abilities of their commanders . . . men like the great initial Crusaders, such as Raymond, Bohemond, Godfrey and Tancred, King Louis VII of France (and his troublesome wife, the famous Eleanor of Aquitaine), Frederick Barbarossa (if he stays away from the pool), the dangerous Nur ad-Din, the magnificent Saladin, and the one Christian the Muslims feared more than anyone, Richard Lionheart. Movement and attrition go hand in hand in this game. Leaders may move as far as they want The game uses three sets of cards (110 cards total). Each of the four Crusader factions -- Northern Franks, Southern Franks, Sicilian Normans, Germans -- and three Muslim factions -- Northern Syrians, Southern Syrians, Mosul Turks -- has three or four Leader cards, which the players secretly "purchase" at the beginning of the Game-Turn to create the Activation Deck that determines which leader goes next. In addition, there are two Event Decks - one for the Crusaders and one for the Muslims -- through which a variety of random events occur, ranging from taking cities via treachery to suffering added attrition through oppressive heat. Normally, each Leader controls armies only from its own faction. However, a simple set of multi-faction rules controls situations in which either side wishes to combine their armies into larger forces, mostly for the sake of sieges against major cities. The Siege of Antioch, which usually happens early in the game, often requires such an army. The multi-faction rules particularly come into their own during multi-player games; here you can expect to see players bickering over who controls the combined forces, an important point considering that whoever is in charge when the city falls gains control over the city. If attacked while combined, the players of a multi-faction force have 30 seconds to decide who's in charge: if they don't, they defend using a mediocre formation. COUNTERS: 876 full color counters MAP: One 22"x34" full-color map CARDS: 110 Cards OTHER: Two six-sided dice First Crusade Rule book Second and Third Crusade Rule book Playbook 4 Player Aid cards DESIGNER Richard Berg DEVELOPER Neil Randall ART DIRECTOR Rodger B. MacGowan CARD ART Mark Simonitch MAP ART Mark Simonitch & Wayne Highland COUNTERS Rodger B. MacGowan, Mark Simonitch, & Mike Lemick