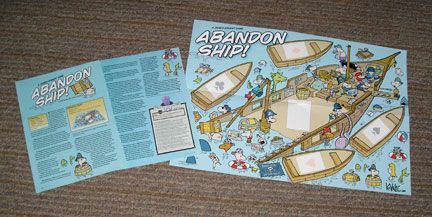 Bonus game from Dragon Magazine #273. Cards can be discarded or used in a battle. When the draw deck is empty, the ship sinks, and there is a showdown to see who ends up in which lifeboat. Points are totaled for the hand, and multiple hands add up to a game target of 200. A variation for 6-8 players and two decks is included. Components are the rules and a "battle mat" depicting the pirate ship and lifeboats. Illustrations by John Kovalic. From the intro paragraph: The rats are long gone, but you're still here. You and your greedy pirate pals are hustling around the deck of a sinking pirate ship, trying to scoop up as much treasure as you can hold. You've got to have a little treasure to buy your way into a lifeboat, and the best lifeboats are the ones with the most treasure in them. It's kind of complicated. Then again, maybe you're just not very smart.