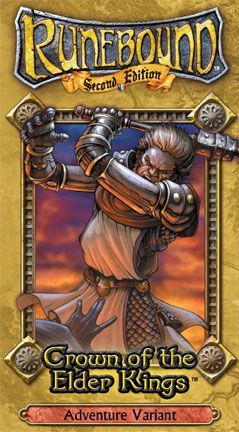 Belongs to the Runebound Series. From the Fantasy Flight Games Website: "Thousands of years ago, in a time shrouded by the mists of history, the Elder Kings came to the continent of Terrinoth. They conquered the land and established a line of kings that ruled the entire continent. In time, these kings became lazy, decadent ... and cruel. Eventually, the Elder Kings were overthrown, the cities became free, and then came the Dragon War and the Elder Kings were lost to the mists of history. Until now." In Crown of the Elder Kings players assume roles of tyrants and villains in the world of Runebound, gathering vassals to become Elder King. The goal is to be the first to collect a set of three vassals (blue challenges), which triggers the endgame. When this happens, other players try to defeat that player and his or her vassals. This is an expansion pack for Runebound (Second Edition). It replaces elements of the adventure deck and creates a completely new story with new challenges, new events, new rules, and new victory conditions. This expansion includes 30 new adventure cards: 9 green Challenges 5 yellow Challenges 16 blue Challenges. Expands: Runebound (Second Edition)