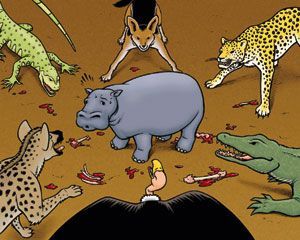 From the publisher: Scavenger Hunt is a hilarious card game in which the ravenous predators of the Savannah out-sneak, out-wit, and out-fight each other in a bloody battle to acquire the most animal carcasses! Each player controls a scavenger, sending them out to retrieve tasty vittles to bring home to the lair for leisurely consumption. Be the best carrion-eater you can be! Scavenger Hunt Features: - Game design optimized for anywhere from 2 to 6 players - Each player controls their own carrion-eater as they battle over the prey animals of the Savannah - Event cards and Skulduggery cards add excitement and intrigue to the game - Win by stealth, speed, or strength! If you find the behavior, locations, or diets of the creatures depicted within this game too unrealistic, put these rules down and go back to watching Animal Planet. No animals were harmed or carcasses devoured in the creation of this product.