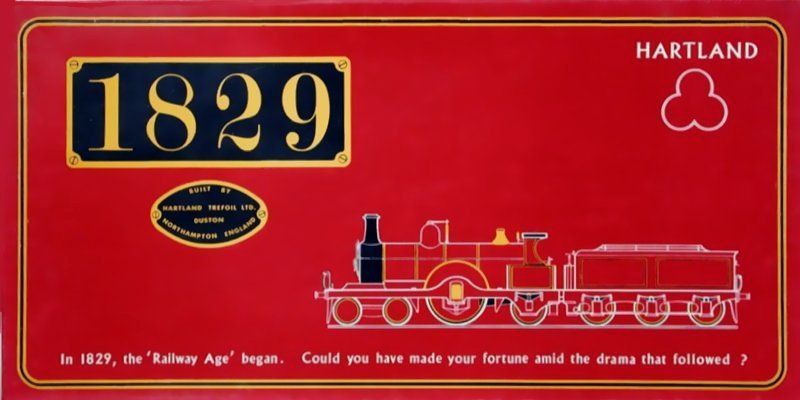 1829 was the first of the 18xx series. First published in the mid-'70s it was way ahead of its time. The game works by alternating stock dealing rounds and operating rounds. Stock dealing rounds allow players to buy shares in the available railway companies. Operating rounds allow the presidents of those companies to build track, run trains & generate revenue for shareholders. This basic system has been much copied and is an integral part of all 18xx games. The original board covered the southern half of Britain, from the south coast to Darlington. In 1981 a northern board was published covering northern Britain & Scotland. Where 1829 differs from most others in the 18xx series is the means by which track is laid. Companies each have a token on the board called a Survey Party. Track is laid by moving the company's Survey token and placing a track tile in the area just vacated... if it is still vacant. This mechanism was discarded in the later 18xx titles, and creates much more of a tactical tile-laying game. It also slows down the game, and 1829 is one of the longer 18xx titles. A typical game can take anything from 4 to 10 hours to play. In 1994 Francis Tresham published 1825, which is largely a modular version of 1829 with simpler rules and a few other enhancements. It plays quite differently from 1829, though, as 1829 was always about competition for routes. The board gaming hobby has in its history a few landmark games, which redefine a part of board games in general, or even spawn an entire genre. 1829 is just such a landmark. Expanded By: MSK 1 Extension Kit for 1829 (Northern & Southern Boards) MSK 2 Extension Kit for 1829 (Southern & Northern boards) MSK 3 Extension Kit for 1829 (Northern & Southern Boards) MSK 5 Extension Kit for 1829 (Northern & Southern Boards) MSK 6 Extension Kit for 1829 (Northern & Southern Boards) 1829 Conversion Kit 1829 Northern Board