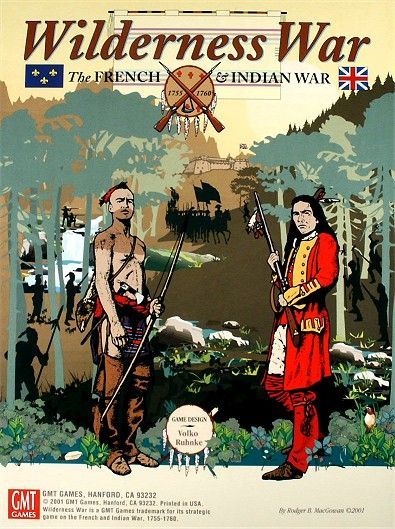 (from GMT website:) Wilderness War takes two players into the French & Indian War, 1755-1760, the climactic struggle between France and Britain for control of North America. It uses strategy cards and a point-to-point map similar to GMT's award winning For the People and Paths of Glory. Players maneuver and fight over a map stretching from Northern Virginia to Canada. As the leader of French or British forces in North America, you will need to defend your frontier, raid your enemy's frontier, build fortification networks through the harsh wilderness, recruit Indian allies, besiege forts and fortresses, and deal with events occurring in Europe that are above and beyond your control. Wilderness War includes a deck of strategy cards for conducting campaigns and incorporating the many events and personalities of the war. The French player can recruit up to sixteen different Indian tribes as allies, secure a continental alliance in Europe against Great Britain, sortie his squadron at Louisbourg, force a ministerial crisis in London, and work toward draining support for the war from the provincial assemblies. The British player can recruit Mohawks and Cherokees, plan for and conduct amphibious operations, implement a global strategy via William Pitt, destroy the French fleet at Quiberon Bay, and expel the Acadians. Relive the history of this exciting time when the fate of Canada hung in the balance. SCALE: TIME 6 months per turn MAP Point-to-point system UNIT Battalions, Regiments, and war parties NUMBER OF PLAYERS: Two COMPONENTS: 271 full-color, die-cut counters, including stand-up leader counters and circular Irregulars One 22x34" full-color mapsheet Note that 2010 Reprint version includes a MOUNTED mapboard 70 Strategy Cards: 16-page Rulebook 24-page Playbook (including a 6-page Example of Play) 2 Player Aid sheets One 6-sided die DESIGNER: Volko Ruhnke DEVELOPER: Rob Winslow MAP & CARD ART: Mark Simonitch COUNTER ART: Mark Simonitch & Rodger B. MacGowan (BGG description:)Wilderness War is a card-driven wargame, dramatically simpler and more streamlined than either For the People or Paths of Glory, but the complexity still exceeds the classic Hannibal: Rome vs. Carthage, but only just. In Wilderness War, the players get to re-fight the 7 Years War in North America. Although only a single deck of strategy cards is used, à la We the People, the two sides are dramatically different in character: the French are irregular-heavy (especially Indians) and rely on raiding to tie down the superior numbers of British Regular & Provincial drilled troops, who will themselves be intent on sieges and trying to force a pitched battle. Like Hannibal: Rome vs. Carthage, the fortunes of war turn as the game goes on: the French are masters early, with the crushing British manpower advantage accruing late. A lot of the interesting aspects of this war are covered through rules or special cards, from the early recalcitrance of the colonial assemblies and infighting amongst the colonials to the very different natures of the battles of outposts and sieges and the raiding in the backwoods. Wilderness War is by the designer of the more recent Labyrinth: The War on Terror, 2001 â€“ ? and Andean Abyss and other GMT COIN Series games.