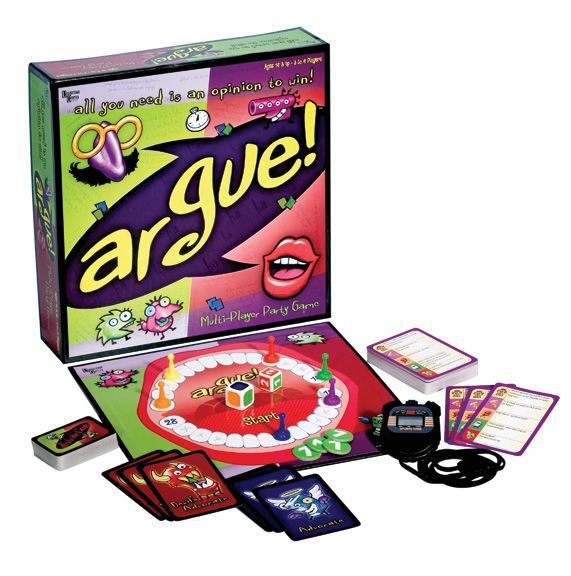 Taken from their press release: The game consists of three to 10 players who are randomly paired up by the unique Player Assignment Cards( included in the game). Paired players then argue topics such as "Who would win in a fight, Mary Poppins or Judge Judy?" or "What is more nerve-wracking: a first date or a job interview?" The non-arguing players then vote on who they felt argued best, each vote equaling a point for the arguing players. After every player has argued twice, whoever has the most points wins the game. "What's fun is that the Player Assignment Cards also determine which side of the argument you must take, even if you do not agree with that side," says White. "So, for instance, if you can't stand rap music, you may be put in the position to argue why you think rap music is great for society. This can be quite entertaining." Included with Argue is 1,000 topics, a precision timer and 100 optional Distraction Cards. These can be used to make arguing more of a challenge by causing players to perform outrageous stunts, such as arguing "while smelling your left shoe" or arguing "while jumping up and down for 15 seconds."