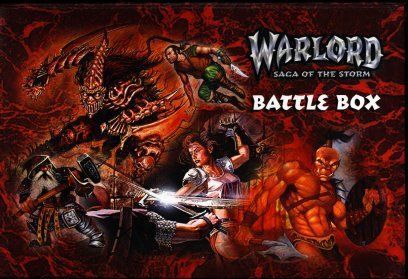 Warlord: Saga of the Storm is a fast-paced game set in the fantasy world of the Lands of the Accord. You play the role of a powerful ruler, responsible for the defense of your lands and the destruction of all those who seek to destroy you. Your people are at war with your enemies, and you must crush your foes on the field of battle. There is no alternative. Your cards represent the forces, equipment, and tactics you have at your disposal as you play the sport of kings in pursuit of complete power. In addition, the cards will unfold a fantasy epic that evolves as new card sets are released. To win this devastating war, you must ultimately destroy the enemy Warlords! There is but one path to victory: survive. Whenever a player's Warlord is killed, that player is out of the game. The last player in the game wins the war. In January 2008, the license for Warlord changed hands: For the 4th edition, available July 31st 2008, PHOENIX Interactive GmbH in Germany is responsible for Warlord. For this major changes were instituted: The format was changed to a customizable card game, where all cards are available in fixed starters, and a new faction was introduced, The Chosen.