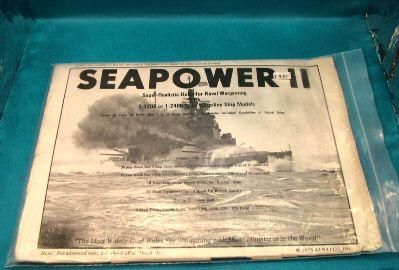 Seapower II is one of the older naval miniatures simulations games and covers the period from 1885 to 1945. Fairly comprehensive, it treats ships rather abstractly and includes rules for aircraft, torpedoes, and many other variables. The booklet Seapower III, which is not a standalone game, ups the complexity quite a bit with rules for weather, coastal forts, and deck armor penetration. Game time is variable but I recall this game not playing too slowly. From the Publisher's Website: SEAPOWER "Alnavco's super-realistic game of WWI & WWII naval warfare; One of the oldest and most widely used systems, it encompasses all aspects of naval warfare incorporating the actual capabilities of warships, aircraft and weapons, both offensive and defensive. It has been designed specifically for wargaming with 1:1200 & 1:2400 models but frankly is interesting reading even if not used for the purpose for which it is intended!"