Under the Lily Banners - Universal Statistics 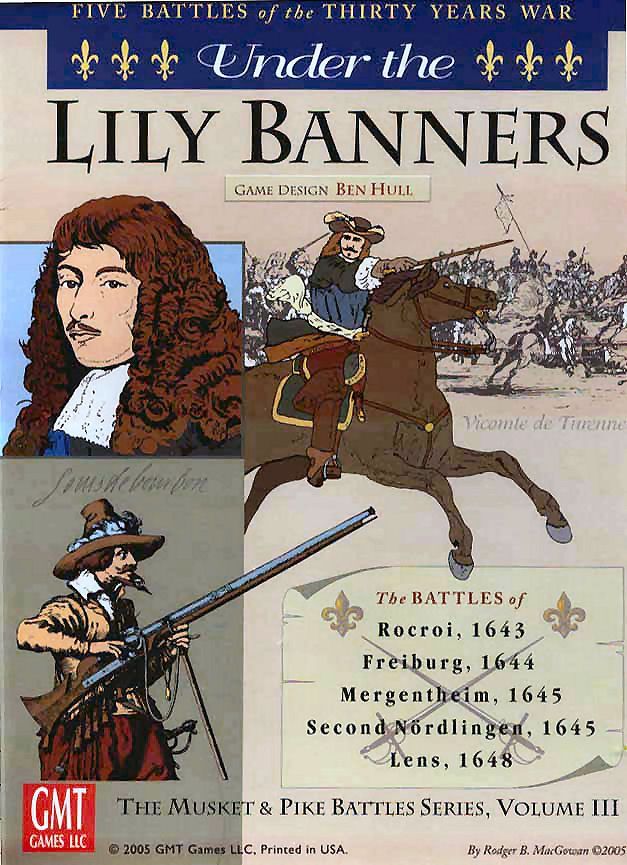 Under the Lily Banners is a tactical battle game featuring five battles from the Thirty Years War. This is the third volume from the award winning Musket & Pike Battles Series detailing 17th Century warfare, often known as the Dawn of Modern Warfare. This volume features the rise of the French Army after their entry into the Thirty Years War in 1635. Two of the greatest captains of French history - Louis de Bourbon, the Grand Condé and Henri de la Tour, the vicomte de Turenne - take the field to set the stage for Le Grand Siecle - the Golden Age of France under Louis XIV, the Sun King. After taking on the English Civil War in This Accursed Civil War and the combined arms tactics of the Swedes and Imperials in Sweden Fights On, the Musket & Pike Battles Series looks at the French, Spanish and Bavarian armies. The Spanish tercios face the superb French gendarmes. The stalwart Bavarians with their excellent cavalry and love of entrenchments battle the veteran Weimarian cavalry corps. Armies are divided into several wings. Each has a commander and an order that limits the types of actions that units of that wing may perform. Victory goes to the player that can coordinate the actions of his wings in the heat of battle. Units are infantry battalions, cavalry regiments and artillery batteries. Rules include cavalry charges, cavalry pistols for skirmishing or for close combat, and artillery grazing fire. Play is highly interactive and most battles can be played through in one sitting. The five battles in Under the Lily Banners are: Rocroi 1643 - The debut of the young duc d'Enghien (later known as the Grand Condé). The most famous battle of the Thirty Years War that broke the power of the Spanish tercios. The French faced a larger Spanish army but the energetic Enghien refused to quit when all seemed lost and snatched victory from the jaws of defeat. Freiburg 1644 - Enghien joined forces with Turenne facing the well entrenched Bavarians. The battle raged for over 3 days until the French were worn down. The French declared victory then bypassed the town. A very different style of battle than any other from the period due to the terrain, style of attack, and duration. Mergentheim 1645 - The Bavarians surprised Turenne's army and inflicted a stinging blow. This is the smallest battle in the series and is included as a learning scenario. Alerheim aka Second Nördlingen 1645 - Turenne, reinforced by Enghien and German Allies from Hesse-Cassel, again faced the entrenched Bavarians. The Bavarians, reinforced by the Imperials, held two hills and the town. Enghien attacked the town and Turenne, at the head of the elite Weimarian cavalry corps, attacked the Bavarian right. The excellent cavalry commander for the Bavarians, Jean de Werth, saw Enghien's attack bog down in the town and attacked the French right, smashing it. The French were losing until the Bavarian commander, Franz von Mercy, fell and in the confusion, allowing Turenne to pull out a victory. The casualties were so heavy the French ended the campaign season three months early. Lens 1648 - The resurgent Spanish under the Archduke Leopold brother of the Holy Roman Emperor pressed into Flanders to recapture the fortress of Lens. With domestic unrest and a military failure in Spain, the French seemed vulnerable. The Grand Condé rushed to the rescue. The Spanish took the high ground, hoping Condé would attack as he had at Alerheim. Instead, he turned and began to retire. A cavalry skirmish with the French rearguard escalated and drew both armies into the action piecemeal. The veteran Spanish tercios smashed the elite gardes françaises, taking their colors as revenge for Rocroi. The French cavalry proved superior and drove off the Spanish horse, leaving the body of infantry isolated on the field where they surrendered en masse. This shattered the last hopes for the Habsburgs, ending their involvement in the Thirty Years War with a defeat. Components: 1 series rulebook 1 playbook 3 countersheets 2 backprinted mapsheets (3 one map battles and 2 half-map battles) 1 die Player Aid Cards Nominee for the 2005 Charles S. Roberts awards for Best Pre-World War II Boardgame (Charles S. Roberts Awards).