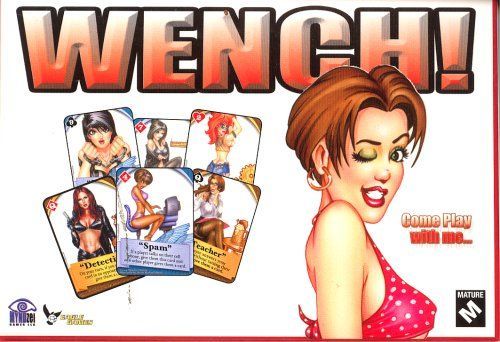 Wench is a fast paced social game utilizing 52 cards illustrated by artist Monte Moore (Magic CCG, Playboy, Lucasfilm, DC Comics.) Wench! A Drinking Man's Thinking Game can be played as a drinking game, or other methods of 'penalties' can be agreed upon by players prior to game play. The cards also feature traditional poker symbols, so the cards may be used to play games such as Texas Hold 'Em, Poker, or a Wench variation utilizing the card mechanics. Cards have 3 different categories, Stein (table cards), Barley (played only on a player's turn) and Wing (which can fly out of a player's hand at any time). The game involves remembering what cards your opponents have that they may have shown during the game, or tricking them into breaking one of your rules or a rule that is in play so they must pay a penalty, and you can remove a card from your hand. The object of the game is to remove all cards from your hand and go 'out,' thereby making the player at the end of the night, who accumulated the most points, The Wench of the evening. They will then have to pay an agreed upon punishment such as buy the beer or pizza, take out the garbage, etc.