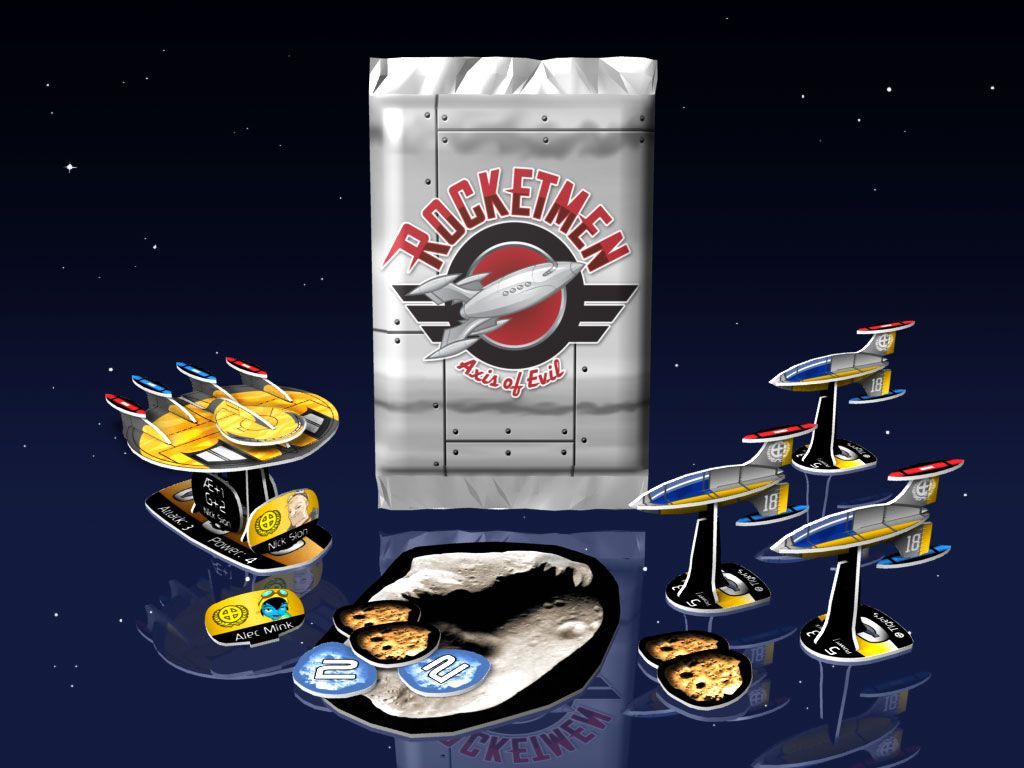 Earth has been overrun by the evil Legion of Terra, and it's up to the Alliance between Earth's rebels, the Mercurians, and the Venusians to stop Terra's and Mars' Axis of Evil! Rocketmen: Axis of Evil is a fast and furious game of spaceship combat between two or more players, who battle for the resources of an asteroid belt and ultimately for the fate of the entire solar system. Players collect ships and crew to build customizable fleets (much like in WizKid’s previous popular game series "Pirates"), and then they gather resources during the game to add more ships to their fleets. The first player to capture his or her opponent's home base, or to destroy all of the ships in his or her opponent's active fleet, wins. In late 2005, the expansion pack “Battle of Titans” introduced 60 new ships and 30 new character cards to the Rocketmen universe, as well as a new ship type (Harvester), pod type (Tractor Beam) and even a new crew type - though technically, it wasn’t really a crew but rather a new weapon called the Torpedo (which loaded just like crew). Each game pack contains 6 plastic styrene cards (2 ship cards and 2 base cards, or 1 ship card and 1 Fighter squadron and their base cards; 1 crew card; and 1 resource card), 2 cardboard ship data cards, 1 cardboard asteroid, 1 six-sided die, and a rulebook (which was updated with the release of Battle of Titans and the new features it brought with it). Each Axis of Evil game pack also contains a small comic of which there were five to be found and these added to the game’s charming story. Each Battle of Titans game pack also contains a Jovian Fuel Jelly template. This can be used with the included scenario (or you can create your own). The Jovian Fuel Jellies float in the upper atmosphere of Jupiter and are the only source of rocket fuel in the solar system. This fuel is harvested by both Ganymede (who has a bigger slice of the rocket fuel pie) and Io using their harvesters.