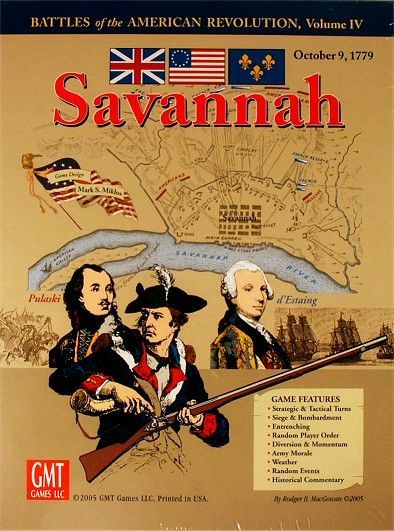 Volume IV in GMT's Battles of the American Revolution Series portrays the events from September 10th to October 9th, 1779, as the Franco-American Allies mount their first significant cooperative effort against the British in North America during the Revolutionary War. Savannah is a departure from the other battles in the Revolutionary War Series from GMT in that it covers a span of up to four weeks. To accommodate this, as well as to depict salient features of an 18th century siege event, several new mechanics including an abstract siege and bombardment table, and a random events deck have been added to the core game system. Unlike previous games in the series, initial turns are strategic, reflecting troop movements over 1 and 2-day periods and allowing for the buidling of defenses by both sides. When the American/French player decides to assault the city, the game switches to the familiar tactical game turns reflecting a single hour of battle. Random Events is one of ten new features and a deck of 55 Random Event cards is provided, most of which define historical events from the actual siege and assault. Players have a maximum of nine opportunities to draw from the deck, although players may use Momentum Chits to "purchase" extra card pulls. Some cards benefit only the Allied Player(s), others benefit only the British Player and some can benefit either player. The cards include both political cards, which may add or dismiss troops to the battle, and tactical cards which effect single combat turns or even single rolls. Components 1 Deluxe cardstock map 2 11 x 17 player aids 1 8.5 x 11 sheet of charts 1 counter sheet (included on the counter sheet are a few upgrade counters for previous games in the series) 1 deck of 55 random events 3 dice 1 series rulebook 1 specific rulebook