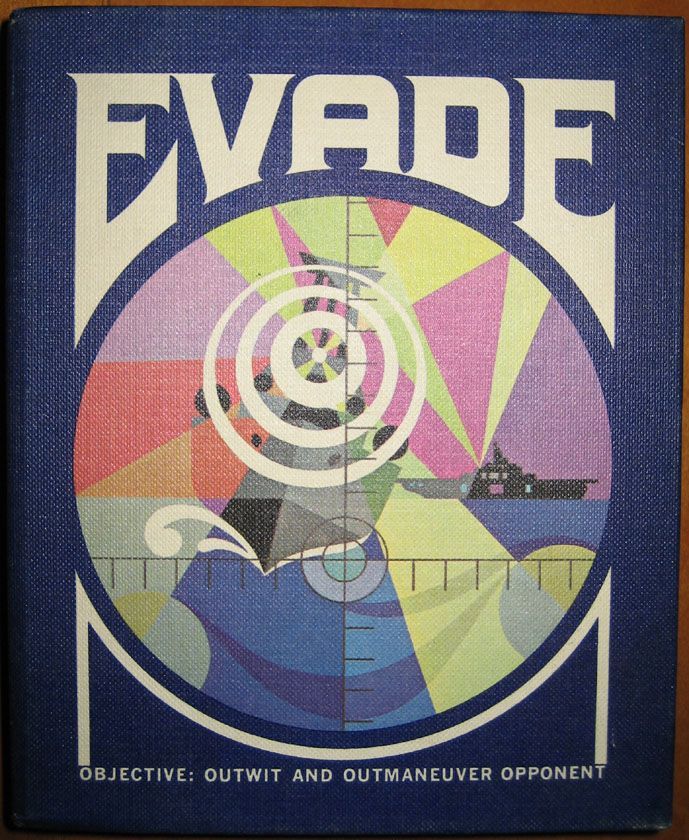 Evade is an old (1971) 3M game, part of their series of 'Gamettes', games which were released in very small, fold-over bookcase type boxes. There were 9 games in this series, which were released near the end of the 3M venture into the gaming market. The game is extremely simple, yet requires quite a bit of 'bluffing' in order to win. Each player begins with six metal pawns along the back row of a 6x6 grid. The board fits snuggly into the box itself and is quite sturdy. The game is, as is the entire Gamette series, ideal for bringing along while traveling. Each player secretly places a teeny magnet under two of his pawns. The object is to be the first player to maneuver one of these 'magnet-bearing' pawns to the opposite side of the board. If you manage to accomplish this feat, you win. Movement is simple. You simply move one of your pawns one space to an adjacent space ... vertically, horizontally or diagonally. If this lands you atop an opponent's pawn, you are both 'frozen' and can no longer move. If you make the mistake of moving one of your 'magnet' pawns onto an opponent, he instantly wins. "Well", you say, "Why wouldn't I just check the pawn to make sure it wasn't carrying a magnet before making such a questionable move?". The rules allow for this, but if you do check, you are prohibited from 'freezing' an opponent that round. So, it's best to remember which two of your pawns are carrying magnets. As mentioned, the game ends as soon as one player manages to get a magnet-bearing pawn to the opposite side of the board. If both players fail to accomplish this, the game is a draw. The game is very simple and the primary tactic is 'bluff'. Are you going to be bold and move one of your 'magnet' pawns to the front, figuring your opponent will guess that this cannot possibly be your magnet pawn as he could freeze it too easily? Or, do you protect your magnet pawns and try to create a path that it can squeeze by your opponent's pawns and scoot to the opposite side? As with most bluff-style games, there's some guesswork and plain old luck involved, but there is still enough maneuvering and tactics to keep it interesting.