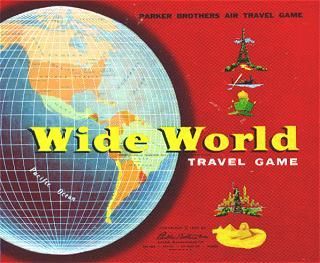 A simple game of racing about the world to pick up and deliver cargoes. In Wide World Travel Game the players fly around the world to a list of destinations collecting cargoes at each then attempt to return to their starting point before the other players. Each player is given a set of "destination cards" and looks at the first one. They then move their plane toward that location by rolling a die and moving that many places. If they roll a 6 or land on a red circle they must draw a "travel agent" card and follow the instructions on it. The only vaguely noteworthy twist is the Weather Overlay, a transparent plastic sheet covering a quarter of the board; now and then it moves to a different quarter, instantly transporting any planes that were on it with it. NOTE: Early editions of the game did not have the weather overlay.