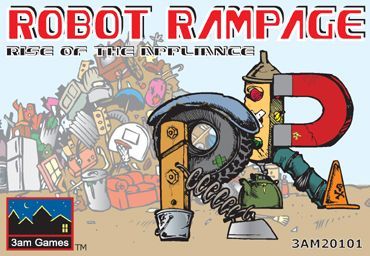 This is the first non-RPG game from 3am Games, a new company whose first release was in June 2004. "Robot Rampage: Rise of the Appliance," a beer-and-pretzels style card game, is due out in June, 2005. From the back of the box: You're tinkers and engineers who have come to the scrap yard to test your mettle. From parts and pieces carefully picked from heaps of junk, construct killer robots capable of visiting devastation and ruin upon all who oppose them. Then, send them into a no-holds-barred, anything goes bot battle to see who's got the roughest robot in the scrap yard! Well, maybe these bots aren't that threatening. But it's still fun to let 'em duke it out!