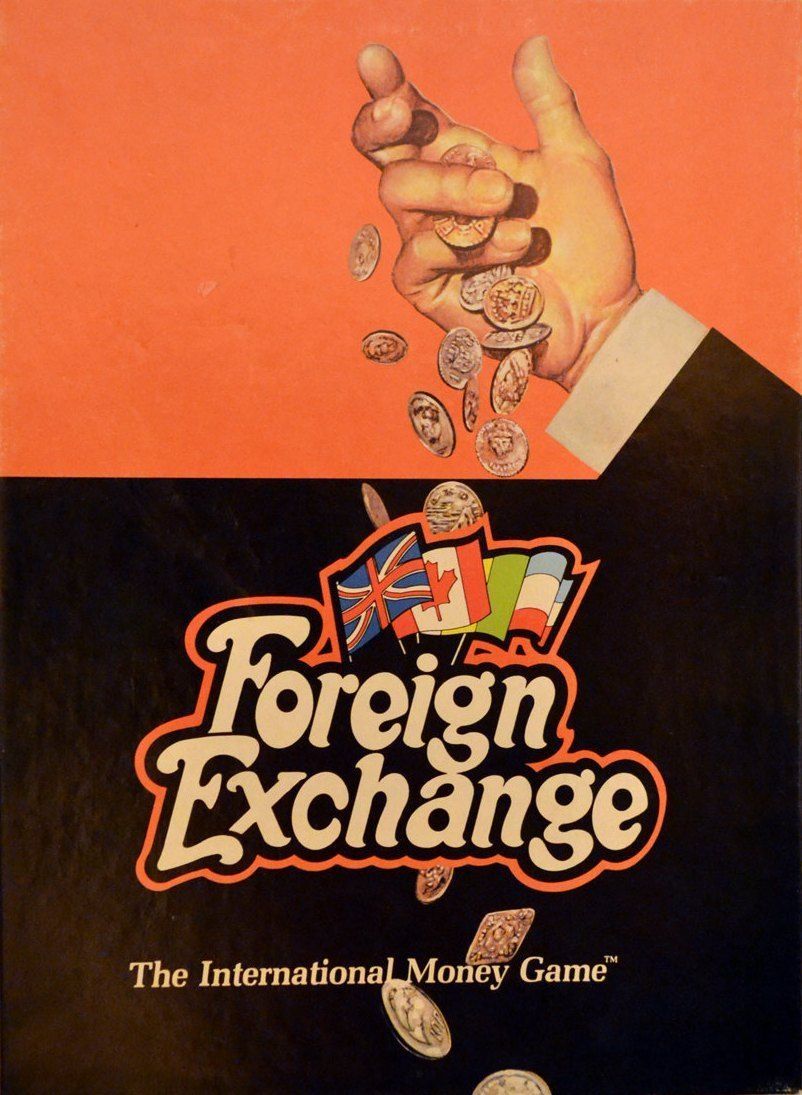 From the back of the box: At last - a money game for adults! Be forewarned! This game might not be for you...unless you are a student of the international money market. Or, you are just plain curious as to why the US dollar is worth less and less despite the fact that we are still the strongest nation in the world. Simply put, Foreign Exchange is not a toy. A perfect simulation of the international currency situation, it is! International companies realize gains and losses when changing currency rates alter the value of their income and assets in foreign countries. This game simulates this situation by letting players own and manage multi-national companies in various cities throughout the world. As in the real world, changing conditions require each player to make constant decisions after considering his company's financial resources - and what he expects his opponents to make - against the cost of alternative protective strategies. The Iranian oil situation of early '79 is a classic real-life example. Iran furnishes less than 7% of America's petroleum needs. Yet its unavailability has done more to devalue the dollar against gold than any economic crises since the depression of 1939. Why so, you may ask. Playing Foreign Exchange will give you insight into this question, and you'll have fun doing so because the game focuses on the interplayer relationships. Without such interplay relationships, no game is fun to play. With it, Foreign Exchange might just be the greatest money game to come along since Monopoly. Ironically, it doesn't come with any money. All financial transactions are recorded on a variety of accounting pads included. If you're into pencils, you'll love this game (some enterprising money -market enthusiasts have already programmed this game on computer). You - as company head - decide where in the world (literally) you want to establish sales and manufacturing offices. This is done at the beginning through a round of trading City Cards among players until everyone is satisfied they've outsmarted their opponents. From this point on, a variety of situations and happenstances will determine likely changes in currency rates. You - the manufacturer - must plan the strategies you think best to maximize gains. Foreign Exchange was designed by a professional money-management expert and executive officer of the leading financial institution. What is duck soup to him, however, might be unfathomable to the novice. That's why the game comes in three versions: a "Beginning" version for game buffs intrigued by money games; the "Intermediate" game for those with a cursory knowledge of what's going on with foreign currency; and the "Expert" game for those people who really have a yen for this sort of thing. Includes: 2-piece fold-out game board Foreign Exchange Worksheet pad Net Worth Worksheet pad Hedging Cost Worksheet pad 24 City Cards 4 Borrowing Cost cards 16 Currency Exchange cards 16 Risk cards 5 player tokens 40 colored markers for 4 different colors 2 6-sided dice Rules