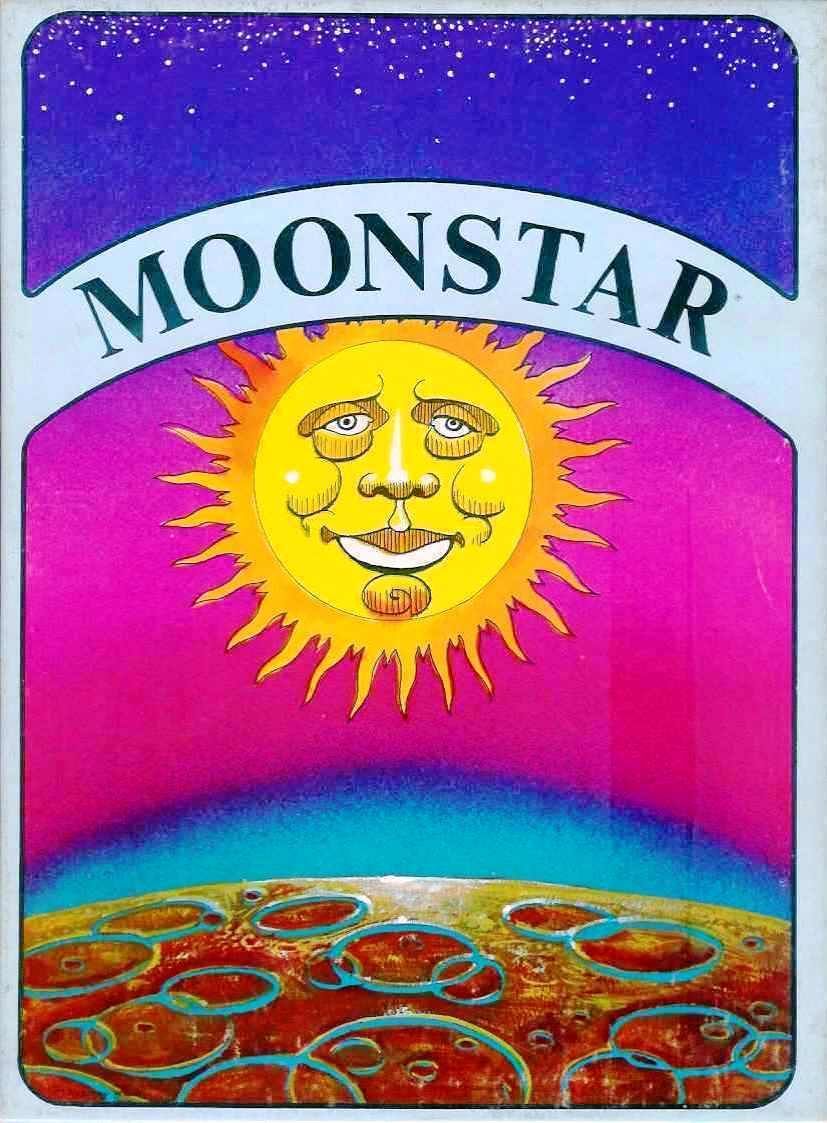 First was published Corona (1974). Moonstar added planets and variants (variant number 8 is Corona, without sand timer). Orbit is new game from 1993. Harun is not new game, it is a rethemed copy of Moonstar! Finally, Randolph recycled most of the game into his Rasenden Robotern (Ricochet Robots) , although the course mechanism and the objective were completely changed. Quite possibly the first "German" game to cross the Atlantic... About the game (from the back of the box) Moonstar is a game unlike any other game for any number of people. All the action is governed by dice, yet there is no luck involved. The dice simply establish the situation. It is up to the players to act upon it. A game with endless variety. Playable by any number of people, from one to a hundred, Moonstar combines numbers calculations, memory, and quick-thinking into a fast-playing, action-packed, exciting contest of pure skill. The board represents the twelve constellations (stars) of the Zodiac and the playing pieces represent moons and planets. Each game consists of a number of rounds of play. In each round, the board and playing pieces are first setup by one of the players. Then the dice are thrown. A one-minute auction period begins. Each player may bid any number of times in the auction or not at all. Each bid, however, must be higher than the previous one. When the one-minute runs out, the highest bidder plays that round. The play of the round also lasts one minute. A player plays a round by placing one die on each moon on the, board and then moving that moon (and die) a number of stars equal to the number of the die. The die is then removed and the moon may not be moved again. This procedure is followed for each moon. The player must move each moon before the time runs out, or those moons which have not been moved may not move. The player's score is then totaled to see if he has made his bid, by scoring a number of points for each moon, depending on which stars and planets they have landed on, If a player makes his bid, he scores a number of points equal to his bid. If he fails, he scores nothing. Rounds are setup and played in this manner until one player has scored enough points to win. But this is only the beginning. Moonstar is actually twelve games in one. Game One is simply the Basic Game. Games Two-Twelve each change one or more parts of Game One, or add something to it. They introduce things like challenging bids, side bets, more moons, more dice, different planet values, no planets. and advanced scoring methods. Includes: 16" x 16" gameboard 15 moon pieces 21 planet pieces 1 minute sand timer 11 6-sided dice rulebook Re-implements: Corona Re-implemented by: Orbit Ricochet Robots