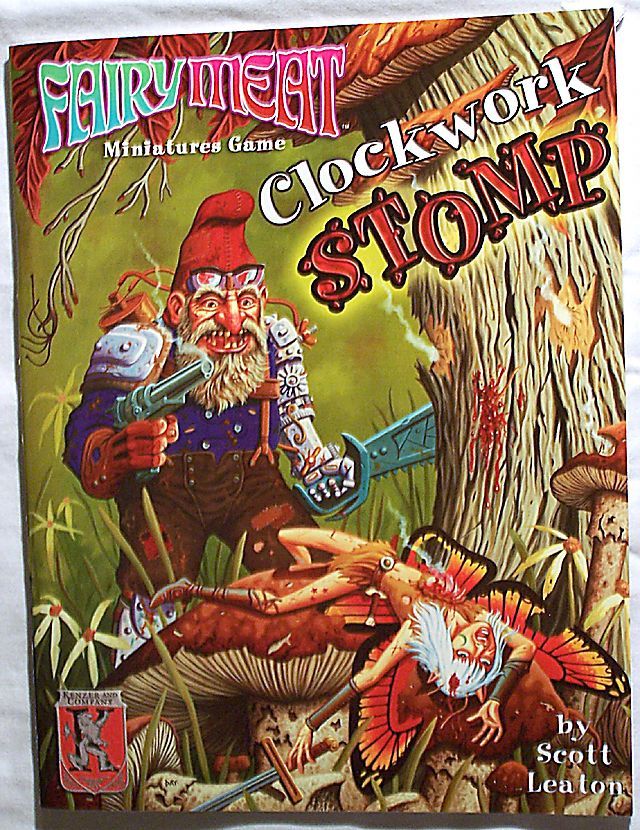 Clockwork Stomp is the first supplement for Kenzer & Company's acclaimed actual-size miniatures wargame, Fairy Meat. Gnomes: Clockwork Stomp contains background information and rules for gnomes, all-new gnome and fairy weapons, special gnomic equipment, status cards and counters, and battle scenarios. Fully compatible with Fairy Meat, Clockwork Stomp is also self-standing game in itself, complete with all the gameplay rules you'll need to load up and march into battle against other wee folk! Slow, weak, and plodding, gnomes make up for their physical shortcomings with deadly ordnance, sinister gizmos and swift trigger fingers. With weapons ranging from the simple Iron Pistol to the horrifying Chainkiller Autocannon, these bearded brains are certainly nothing to laugh at! And with the addition of a mechanical limb or two, even hand-to-hand problems can be overcome- with some small sacrifices... The gnomes are joined in battle by their mechanical minions, the clockwork fairies. With a mechanical, propeller-driven body and a living fairy head, the gun-toting clock-fairies provide speedy support for their gnomic masters' field operations. Rules are also provided for Rogue Clocks, liberated Clockwork Fairies for use in your own Fairy warband! Also included are rules for the magic-wrench-wielding gremlins (foes of anything with moving parts) and an array of gnomic equipment, including toxic Faecide Foggers, Pipe Bombs, and the short-lived Hatbots. Expands: Fairy Meat