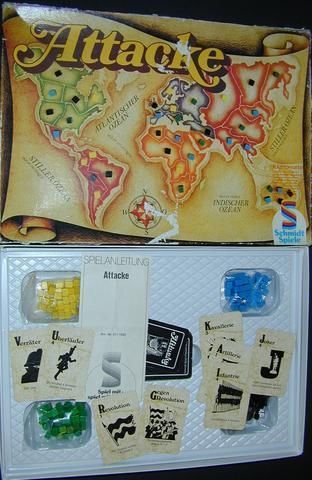 A game of strategy with bluff and tactics for 2-4 players whose object is to eliminate all other players. At first glance, this is a Risk knock-off. A closer look reveals a different game. For starters, each of the 42 lands can only be occupied by a single token, which act more as visual aids than as armies per se. Combat is card--driven, each player playing from a hand of five cards. There are Artillery, Cavalry and Infantry cards, of various values; you're allowed to play up to one of each kind when attacking or defending. Joker cards can substitute for any given type. You can play your entire hand of five cards if you wish, but you only draw two per turn, so this could leave you exposed. Treason cards allow you to take over a non-contiguous land; Desertion cards allow you to get army cards from another player. The Revolution cards are very powerful as they will take over an entire continent! Luckily, there are Counter-Revolution cards in the deck as defense. A refreshing change from Risk, and certainly playable in a lot less time.