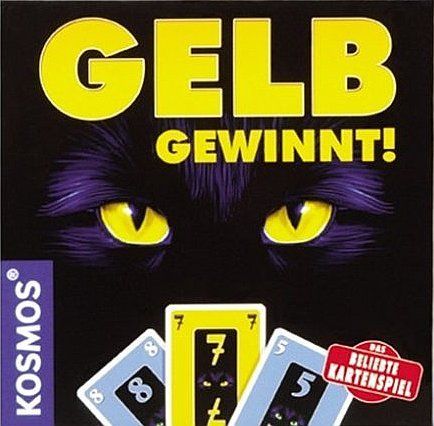 Gelb gewinnt! is based on the Italian game Scopa; Kosmos described it as Scopa in German style. The game consists of two deck of cards, each consisting of 10 yellow cards and 30 blue cards, valued 1-10. In addition, 80 victory point chips are included. Each round is played as follows: the dealer will deal each player three cards. Four cards are played on the table, open. The players now take turns playing cards. On each turn, a player can play exactly one card. A player can use this card to capture a number of cards on the table. Cards can be captured if the sum of those cards is equal to the card played (i.e. you can capture a six and a two by playing an eight). If a player cannot capture any cards, he has to add a card to those open on the table. A player gets one point for capturing all cards on the table. The round lasts until all players have played their three hand cards. Now, each player receives points: One point for the player who has captured the yellow seven, one point for the player who has captured the most yellow cards and one point for the player who has captured the most cards. The play continues for a couple of rounds (either six rounds for two or three players, or a number of rounds equal to the number of players if there are four or more players. In the end, the player who has collected the most points wins.