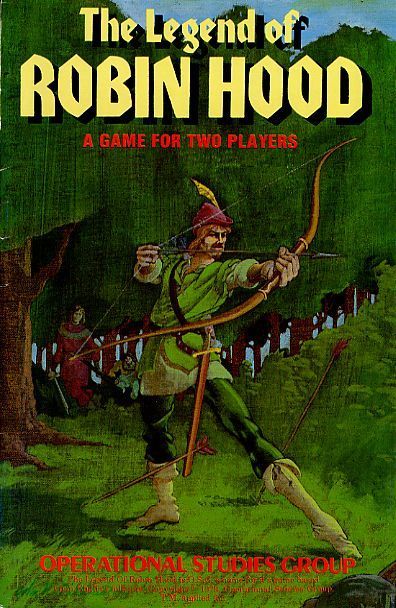 One of the most well-known tales in the history of literature comes alive in Avalon Hill's new strategy game for two players, The Legend of Robin Hood. The setting is 12th century England, before the signing of the Magna Carta, as the daring outlaws of Sherwood Forest oppose the Sheriff of Nottingham, Sir Guy of Guisbourne, and the evil Prince John. In the absence of King Richard, it is a land beset by the oppressions of nobles and clergy whose only concern is their own well-being. As Robin Hood, you must enlist the support of the local populace (including Little John, Will Scarlet, and Friar Tuck) and rob the rich to give to the poor. As the Sheriff of Nottingham, you must insure the safe passage of the wealthy through the area, tax local villages to raise money, capture and hang the outlaw leaders, and help to prevent the return of good King Richard from the Crusades. In a typical Game-Turn, Robin Hood will move his forces from area to area, trying to best position them for recruiting new units and ambushing travelers passing through Sherwood Forest. The Sheriff Player will position his forces in an attempt to protect the travelers and possibly trap and capture the outlaws. Battles occur when both Players have forces in the same area, and are resolved by die rolls representing Archery and Melee Combat.