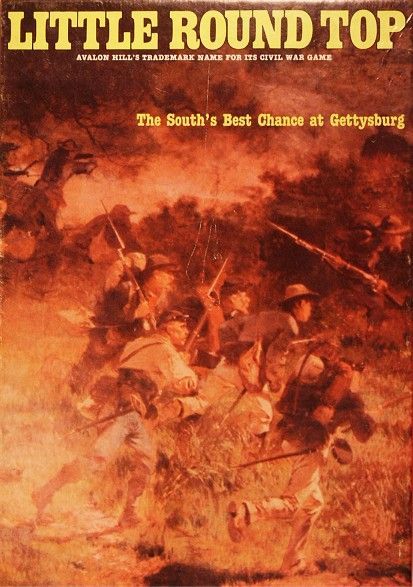 The battle of Gettysburg was a huge struggle that locked armies of the North and South in three July days of bitter warfare which turned the tide of the Civil War against the Confederacy. Among the many small actions that made up this battle none was more important than the fight for Little Round Top, a rocky forested hill on which rested the extreme left flank of the Union line. It was here that the outnumbered 20th Maine regiment held off repeated Confederate assaults, turning back the South's best chance to win this battle which they could not afford to lose. LITTLE ROUND TOP is Avalon Hill's new game for two players which re-creates this critical battle. During a typical game turn, both players move their company sized forces over a map of the battle area, positioning them for rifle fire and bayonet charges. Fire and melee combat are resolved by a die roll on the appropriate Combat Results Table. Regimental officers and their command abilities are crucial for keeping the attack moving forward or the defense intact. LITTLE ROUND TOP comes complete with a colorful map of the battlefield, 100 cardboard playing pieces, and a short rules booklet. Playing time: 2 1/2 hours Complexity rating (from 1-10, 10 the highest): 4