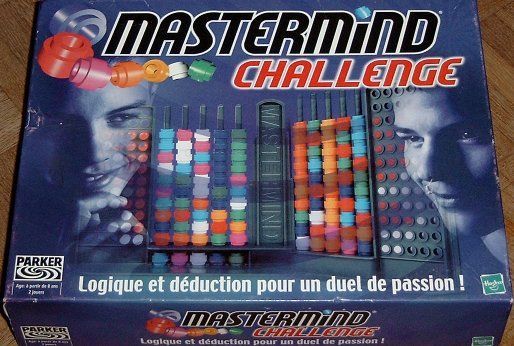 A further variation on the popular Mastermind Series of games first introduced by Invicta Games in the seventies. In the original Mastermind once the code setter has set his secret code, other than put pegs in the board to confirm how close the code breaker is getting to solving the code, he has nothing to do, other than sit there watching his opponent struggling to find the hidden code in the least number of goes. In Mastermind Challenge, using the specially designed board, both players simultaneously try and solve the other players secret code. Each player hides a secret code of 5 out of a possible 8 colors. His opponent then has to guess this combination, colors and position. Each player places 5 colored beads onto the board. Each code setter then users marker pegs to denote how close the code breaker is with this combination of colors. Players carry on in this way using different combinations of colored beads until one of the players guesses the correct combination. The player that guesses his opponent's secret code in the least number of attempts wins the game. The simplified version of this game is Kleur Bekennen that uses three columns of information instead of five.