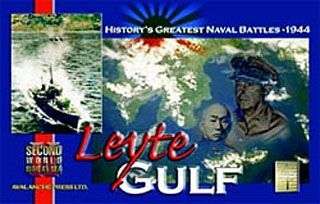 Avalanche Press calls this their "Ultimate World War II Naval Game" - a claim with some merit, it would seem, as this game is ENORMOUS. “Leyte Gulf” is a "Second World War at Sea"-series game based on the final struggles of the Imperial Japanese Navy. The largest naval battles in history are included here – the Battle of Leyte Gulf and the Battle of the Philippine Sea. In addition, the Battles of Cape Engaño, Surigao Strait, and Okinawa are covered by the game. The American fleet is enormous in this product, while the whittled-down Japanese fleet is not much larger than the “SOPAC” and “Midway” games. To ‘balance’ that side in hypothetical scenarios, some projected but never completed, or sometimes built, units are available as options to the Japanese – such as the third Yamato-class battleship, all six Unryu-class carriers, the “B64”-type Battlecruiser (one of the two named by AP “Sagami”), as well as squadrons of hypothetical “second generation” Japanese aircraft. It’s a “worst case scenario” plan for American military staff. The Americans get some new toys, too, including the first appearance in the series of the F4U Corsair, the Iowa-class battleships (and a special guest appearance by the Montana-class), Baltimore-class heavy cruisers, Cleveland-class light cruisers, Independence-class escort carriers, Essex-class fleet carriers, and the fabulous Alaska-class battlecruisers...errr...”large cruisers”, that is. The Royal Navy, Australian Navy, and New Zealand Navy all make appearances as well, driving this product up to simply ludicrous counter numbers! Leyte Gulf includes: 24”x18” tactical map Three 34”x22” operational maps Nearly 2,000 game pieces 24-page series rule book 24-page scenario book 2-player aid cards 6-organizational cards