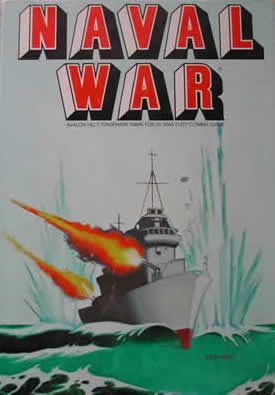 NAVAL WAR is a card game of strategy, skill, and luck that is based on World War II naval combat. Each player controlsa "fleet" of warships, and attempts to sink the other player's ships. The battleships, aircraft carriers, and battlecruisers of WWII roam the seas again! In this unique card game, three to six players command a "fleet" of the world's most feared ships. Drawn from a deck of 54 cards, you might get the Bismark, Gneisenau, Prince of Wales, Hood, Ark Royal, Roma, New Jersey, Enterprise, Shokaku, or even the gigantic Yamato, the largest battleship ever used in battle! Using another 108 card deck, you can attack the enemy with salvos from your guns, make carrier strikes, destroyer torpedo attacks, raids by submarines or torpedo boats, or set up minefields. NAVAL WAR is based on historical data, but is is a quick play "beer and pretzels" game rated 1 on the Avalon Hill complexity scale (1-easy to 10-hard) Expanded by: Cards at Sea (VAIPA Express)