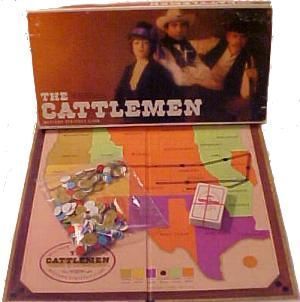 "An exciting land-grabbing, claim-jumping game of the Old West, pitting one land baron against another" The object of the game is to take over all the land and industries in the Old West. The map is divided into "claims", which are states (or parts of states) grouped into various industries (timber, gold, oil, farming, cattle...) or railroad spurs. There are 32 claims in all. In the first phase of play, each player stakes one claim (including claims already staked by that player or another one), until all claims have at least one stake on them. After that, each player collects money based on any one claim he owns, and uses that money to reinforce his existing claim(s) or to jump another player's claim. This process continues until one player has forced all other off the board.