The Lord of the Rings Adventure Game - Universal Statistics 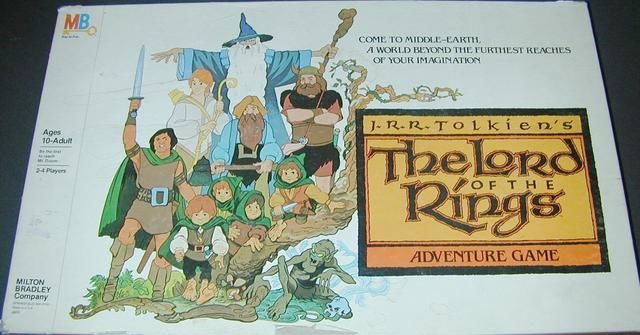 Milton Bradley marketed this game as a tie-in with Ralph Bakshi's "Lord of the Rings" animated feature film. However, aside from the artwork and the piece names, the game only bears a superficial resemblance to either the movie or Tolkien's works. Each player chooses a character from the Fellowship. The object of the game is to have that character cast a magic Ring into Mount Doom. Along the way from the Shire to their final destination, players have opportunities to pick up *several* Rings. These rings may be spent to get past opposing creatures. However, to win the game, a player must have at least one Ring when they reach Mount Doom. Cards allow a player to move 1-3 clear spaces ahead, to defeat Orcs or Nazgul, to bypass the various opposing creatures on the board, or to traverse mountain terrain, dictate movement. Cards are also useful for stealing rings from an opponent, relocating Nazgul on the board, and other functions. Each player has a hand of 5 cards with which to play the game. Die rolling comes into play for fighting Orcs, Nazgul, Shelob and Gollum when you don't have a card to defeat (or escape from) them, or to traverse the mountains. A special die tells players how many turns they will be bogged down in a mountain space once they enter it. Card and Ring management afford strategy opportunities, while the rules remain simple enough (and the game quick enough) to allow the game to be played by a wide variety of ages. Despite its divergence from the main story, the game itself offers a measure of challenge that makes it enjoyable - far more so than it would have been as a simple "roll-and-move" game with a strict adherence to the movie or book theme.