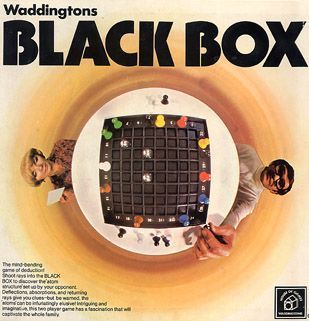 Black Box or "KO-code" is a puzzle game in which one player creates a puzzle by secretly choosing the positions of 4-5 marbles on a 8x8 grid. The other player tries to guess their positions by shooting 'rays' into the grid and seeing how they bounce around. The player requiring the fewest rays to solve a puzzle wins. The German First Edition was named LOGO but the LEGO-Company was not amused with this Title and thought there will be a possibility of confusion. So PARKER renamed the Second Editon to ORDO.