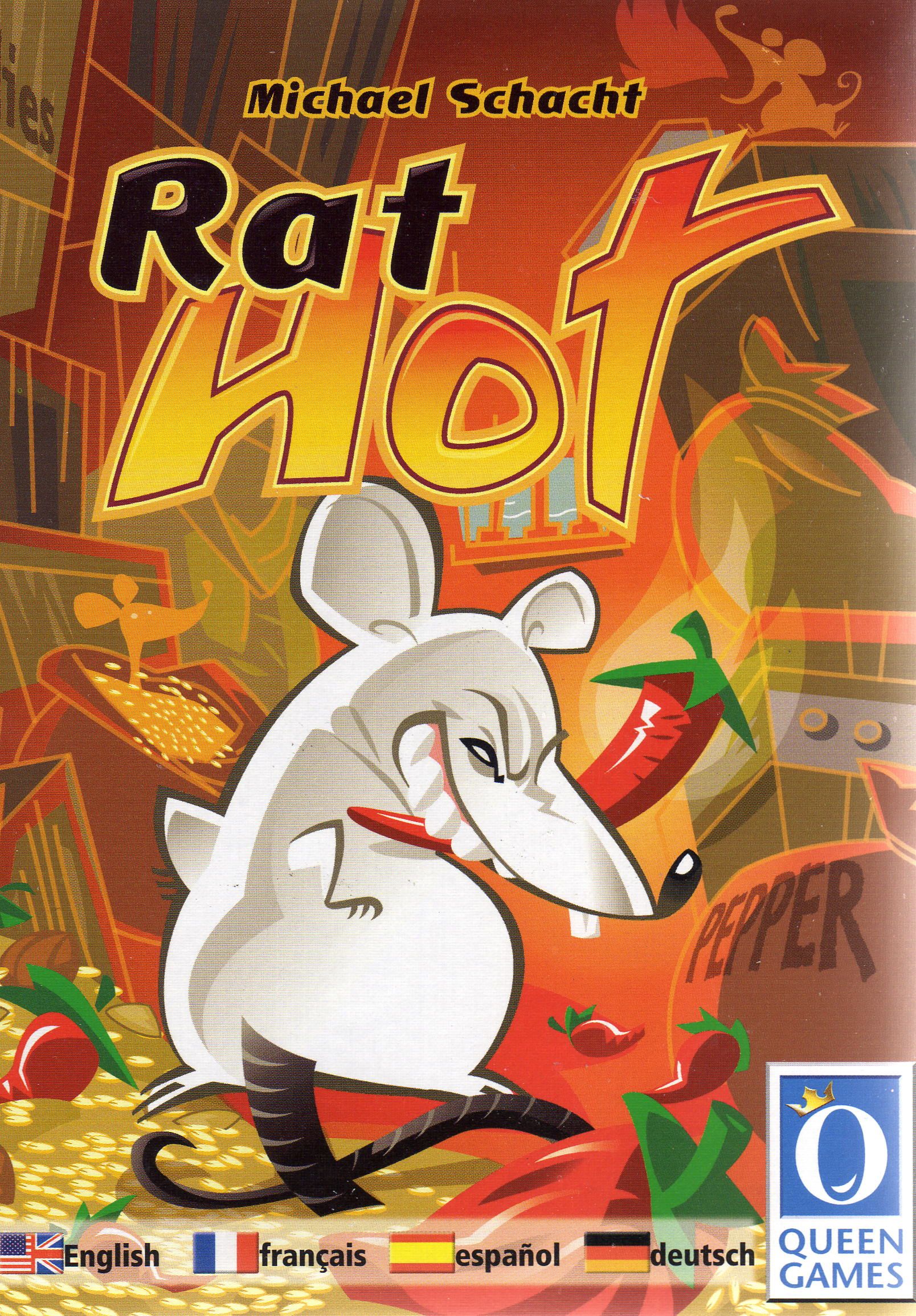 Two spice dealers share a storehouse with a number of hungry rats, who want to put them out of business. The two dealers want to store spices so that they know where everything is, but they also have to keep the rats at bay. Stack your crates, keep your spices together, and cover up the rats. Rat Hot is a two-player game developed from Michael Schacht's Dschunke: Das Legespiel on his own label Spiel aus Timbuktu, which in turn was developed from his game Dschunke, also published by Queen. The Rat Hot tile distribution differs slightly from Dschunke: das Legespiel but you can very nearly use the Dschunke: das Legespiel rules with a Rat Hot set. All the games use the clever mechanism of stacking long 3x1 tiles so that the upper tiles obscure some parts of the tiles underneath. In Rat Hot, the two players simply take turns to draw 2 tiles from a face down pile, and add them to the existing layout. The tiles are all 1x3 and show a combination of rats, spices or empty crates. Each player has four different types of spice in their player colour which they are trying to form into large groups. Many of the tiles have spices of both colours. The game is scored with grey and yellow chips which represent 1 and 2 points. Each time you place a tile, you and your opponent can score points from groups created or changed by that tile. Whenever a group of two of the same spice is formed, the owning player receives one point, or two points for groups of three or more. Beware! If there are three rats of your own colour visible at the end of your turn, you instantly lose. When the draw pile is exhausted and the tiles all placed, the board is scored once more for all players, so trying to preserve existing groups also counts. The real trick in the game comes in the tile placement. Tiles must be adjacent by at least one square. Tiles can placed on top of other tiles, so that stacks build up. But a tile can not sit exactly on top of another, so there must always be some offset, and all three squares of a tile must be supported by other tiles, or the table. Rat Hot can be very tricky. You want to keep your opponent's rats exposed in awkward places, so they have to spend both their moves trying to keep the rats covered. But you also want to set up scoring positions, and cover your own rats, and avoid giving your opponent points as well. There's a good mental challenge here, as you puzzle over the best use and arrangement of your tiles. Do you dare leave two of your rats open, because your opponent may draw more of your rats and make it impossible for you to finish your next turn with less than three showing. Can you get a good group of spices going and also break up your opponent's groups? Tricky problems for tricky minds. Rat Hot is a quick, fun game and is a good addition to Queen's line of small 2-player games. The wood chips make it easy to see who is leading, the tiles are nicely made, the graphics are fun, and the game plays quickly and fairly. You can be stuffed by unlucky tile draws, but perhaps your low score is more to do with your choices, or maybe the other player is just smarter than you. Fast play, easy rules, and the risk of sudden death give Rat Hot a high replay value.