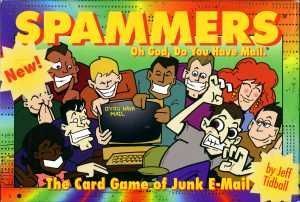 FROM the SESSION REPORT: Each player is competing to pull off the most lucrative scams. You do this by spamming mailing lists. The more closely related the mailing list is to the type of scam you're trying to pull, the easier it is to score. Scams come in 4 types - sex, internet, money and free stuff. The text and art flavor are quite wonderful. Of course the sex scams appeal the most - highlights were the Virtual Jellorama, Walter's Wankery and Disgusting Dog Tricks. If you're geeky, some of the internet scams are witty. All the standard 'make money doing nothing' and free stuff scams are there as well. You play scam cards in front of you (up to 5) and then play mail-out cards (spams) trying to lure people in. There are a number of mailing lists of various sizes in the middle for anyone to mail to, plus each player has some private mailing lists that only they can spam. The action is to play a 'mail' card, nominating both a scam and the list that you're mailing the scam offer to. If you roll a d6 less <= the size of the list, you succeed, and that scam scores a point. If you roll way under (4 or more), your scam scores 2 points. Some lists specialize in one of the 4 scam types ... if your scam and the list matches, you get a modifier of +2 making it easier to score, plus the mail-out cards have modifiers between 0 and +5. Simple so far, but every time a mailing list gets spammed, it decreases in size by 1 (1 million thematically which equals 1 on the die) - these are subscribers getting disgruntled by the amount of spam they're receiving who leave the list. The winner is the first person to get 20 points across all their scams, or who gets a single scam of 12 points BUT it's only checked at the start of your next turn. A turn consists of 3 actions surrounding 2 decks - list cards and action cards. An action is pick up a card, play a card or merge 2 lists (making one bigger list you can then mail to). The action cards consist of scams, mail-outs or hardware cards. Hardware cards are played in front of you and allow you to break the game rules in a prescribed way (eg can mail other's private lists). Mail-out cards also list special effects which vary from mundane to wildly powerful but generally allow you to hose other players. When you play one, you say whether you're mailing or playing the special effect. To the game play itself. You try to get a mail-out going every turn (you're only allowed one) and pick a scam / list combination that gives you the best chance of scoring 2 points rather than 1 point. If you only get 1 point, you may well be falling off the pace. You're generally picking up at least one card each turn, and this can be a slow process as any special action needs to be read and understood to work out whether you want to use the card as a mail-out or for the special effect. So it's not the fastest game in the world. These hostage cards also make it a big hit the leader game. If you're going to make a dash for the lead have plenty of protection cards because you have to maintain your winning score for a full round before you win - everyone gets a shot at you.