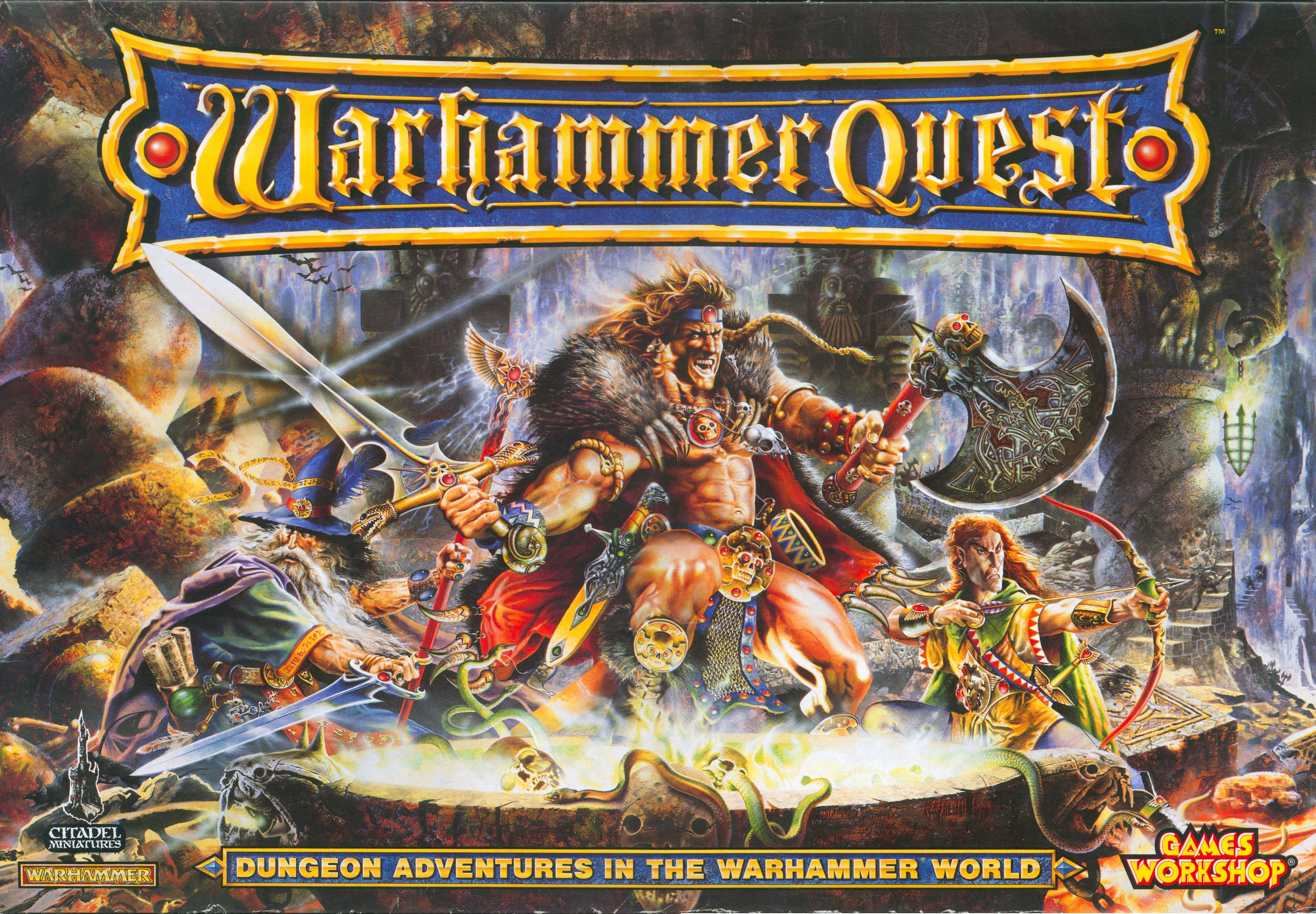 Warhammer Quest is the original game in the Warhammer Quest Series. From the Main Rulebook: In Warhammer Quest each player takes the role of a warrior, one of four brave adventurers willing to test their courage in the search for wealth and glory. Each hero comes from a different people. The Barbarian has traveled far from the savage north, a land of bitter cold and ferocious warriors. The Wizard hails from the cities of the Empire, the largest and most important of the realms of men. The Dwarf is drawn by the goldlust for which his race is famous. Dwarfs are grim and rather abrupt, but they are good fighters and loyal friends who remember debts of gratitude as readily as debts of coin. The Elf comes from the green woods of Loren where his kin spend their days hunting and making merry, protected from evil by the strange magic of their land. Elves are incredibly quick and agile, and they are also the best archers in the world. In the Warhammer Quest game the players enter a dark and forbidding dungeon. Together they must face the horrific dangers that wait for them. They will be attacked by monsters such as Orcs, Goblins, Skaven and Minotaurs. Other perils lurk in the darkness: scurrying venomous things like spiders, deadly pit traps, and decayed tunnels that cave in at the slightest touch. If they complete their quest the players will be rewarded with gold, treasure and artefacts of magical power. The more gold and treasure you can discover the better.., and the player whose warrior amasses the greatest fortune has done best of all! Warhammer Quest is probably unlike other games you have played. Rather than each player competing against the others, all the players must co-operate if they are to win. Also, there is no single board. Instead, the different rooms and corridor sections are clipped together to make a dungeon that is different every time you play. The game rules may seem a little complex at first - but don't worry a lot of the rules are designed to extend the game and are not vital to begin with. The actual game rules you need to play are in this book or printed on the various cards. The hugely thick Role-play Book is all extra and alternative material that introduces you to a whole new hobby of role-playing Warhammer Quest. - Warhammer Quest Contents - 4 Warrior models: Barbarian, Dwarf, Elf and Wizard 6 Orc Warrior models 6 Orc Archer models 6 Goblin Spearmen models 6 Night Goblin Archer models 12 Skaven models 3 Minotaur models 12 Giant Spider models 12 Giant Bat models 12 Giant Rat models 12 Snotling models 10 Dungeon Doorways 32 Page Rule Book 16 Page Adventure Book 192 Page Role-play Book 1 How to Play sheet 50 Page Adventure Record Pad 19 Event Cards 23 Dungeon Cards 30 Treasure Cards 17 Blank Event Cards 15 Spell Cards 4 Warrior Cards 4 Battle-level Cards 4 Equipment Cards 4 Warrior Counters 6 Dungeon Rooms 5 Objective Rooms 7 Corridors 1 Steps 3 T-junctions 1 Corner 1 Portcullis Marker 1 Cave-in Marker 3 Pit of Despair Markers 6 Webbed Counters 15 Power Tokens 10 Luck Counters 18 Scenery Markers 6 Large Dice & 12 Small Dice