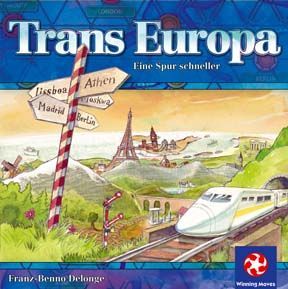 Trans Europa is a simple railway game. Each player has a set of five cities strung across Europe that need to be connected by rail. Players place either one or two rails each turn. The first player to connect their five cities wins the round, with all other players losing points for being too slow! After 3-4 rounds, the player with the most points wins! One version of this game, TransEuropa+, includes the Vexation expansion of colored rails, with each of the six colors having three colored rails. When you place one of these rails on the board, it counts only as part of your network and not anyone else's. The 2018 edition of Transeuropa, which is the preferred spelling of the publisher although the box suggests otherwise, includes a slightly different map of Europe, with the colored cities rotated so that all of the yellow cities are in the UK and Scandinavia. What's more, these cities are separated from others by double-squiggly lines that represent spaces where a ferry can go. As with the Vexation expansion, in this edition each player has three colored rails, and on a ferry route up to two rails can be placed, whether both colored rails or one being colored and the other a normal black rail line that any player can use. A player can lay only one colored rail per turn, and they can claim both possible rail lines in a ferry space. A ferry space is not complete unless it contains two rail lines.