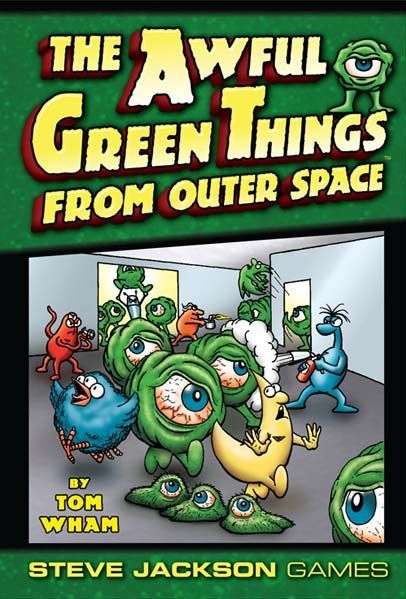 The Eighth Edition is finely produced with thick cardboard counters and a sturdy thick game board. The rules are in full color (with cartoon) and very well done. This humorously entertaining game pits two players against each other aboard a spaceship. One plays the ship's crew, trying to kill the evil and rapidly-multiplying aliens controlled by his opponent. And although the crew members have several weapons available to them, they don't know what effect those weapons will have until they try using them in combat against the Awful Green Things. Originally appeared in the Dragon magazine #28. The Outside the Znutar expansion, published in Dragon magazine #40, is included in the box in the Steve Jackson Games versions of the game. A similar but more serious game is The Wreck of the B.S.M. Pandora. Supplemental articles were published in TSR's Dragon Magazine including: "The Awful Green Things From Outer Space" Tom Wham - Issue 28 (page 26) Addenda "Outside the Znutar" Tom Wham - Issue 40 (insert)