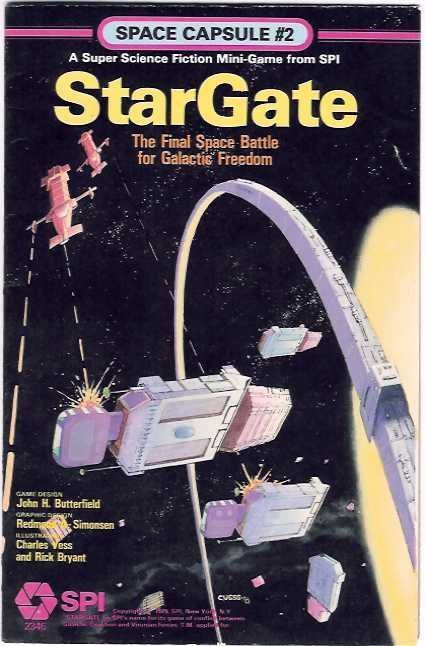 SPI's Space Capsule game #2. SPI seeing the popularity of Metagaming's Microgames started publishing small format science fiction and fantasy games in the late 1970's and early 1980's. From the rulebook "Streaming through the mysterious stargates, the power-hungry Virunian forces have wracked the Milky Way for nearly 80 years in the War of Purification. Remnants of the civilizations devastated by the Virunian Tri-Ships, banded together in a determined coalition, awaited the moment to launch their counter-stroke. In 2519 AD, the moment had arrived: the Virunians encounter their nemesis and, retreating headlong to the source of their power, find themselves dispersed and without their potent unified command. Coalition telepaths, sensing the Virunian confusion, direct their forces to the Nullgate, arriving just as the first helpless Virunian vessels tumble forth from the stargates. The battle to ensue will decide the Virunian fate in the galaxy. StarGate re-creates this climatic battle using a stylized, semi-abstract system of movement that allows combatants to conceal themselves from one another in the various planes and dimensions created by the Nullgate. Players use cardboard playing pieces, representing units of the Virunian and Coalition forces, to maneuver and engage in combat. Simple probability charts reveal the outcome of combat and various game functions."