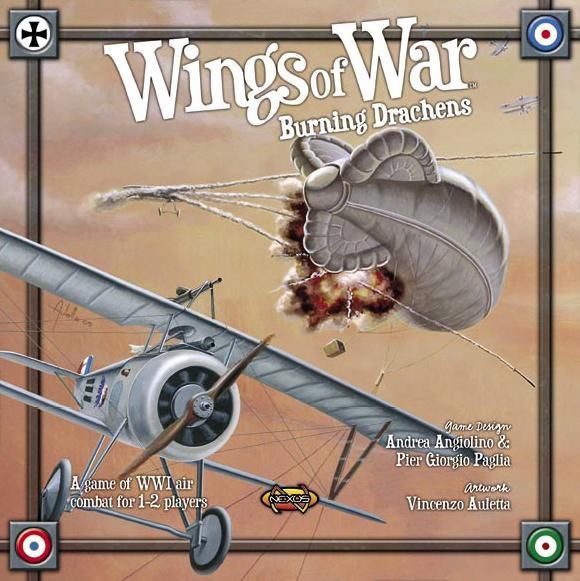 Wings of War: Burning Drachens is the third set in the Wings of War collection. It includes some of the most used airplanes of the WWI as the Nieuport 17-23, the Albatros D.III, the Pfalz D.III/D.IIIa. It also includes optional altitude rules, anti-aircraft guns and machineguns. Other additional rules are proposed for a more intriguing and varied simulation of WWI air combat, even if the basic system is the same, simple one of the first two sets. Huge cardboard observation balloons are the targets in solitaire and 2 players scenarios in which to use incendiary bullets or the famous Le Prieur air-to-air rockets. Other scenarios will include 1 and 2 players trench strafing missions. The set is totally independent, but it can be mixed in the others in the collection for larger scenarios. Card Decks A Damage Deck cards 1-36 C Damage Deck cards 1-17 D Damage Deck cards 1-8 2 Card Maneuver Sets A-J I Maneuver Deck cards 1-18 J Maneuver Deck cards 1-18 Airplane cards 1-16 A and B ground card deck 1-4 C ground card deck 1-3 1 Blank ground card no number