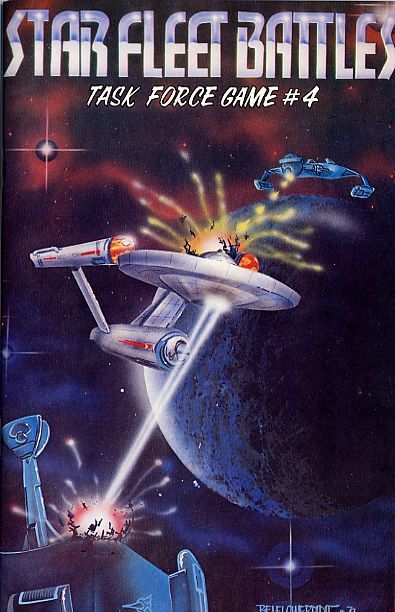 Initial publication of the games in the Star Fleet Battles series. This was one of the first Task Force Games Pocket Games. It was re-implemented and expanded several times after the original "Pocket Game." This is the classic game of tactical Starship combat set in the Star Trek universe (the original TV show), though you will never see "Star Trek" anywhere in the game (licensing limitation). Players command one or more ships from the Federation, Klingon, Gorn, Romulan, or Kzinti fleets, sporting all of the expected Star Trek weaponry like phasers, disruptor bolts, photon and plasma torpedoes, and tractor beams. Also includes other weaponry not commonly seen such as drones (homing missiles). Players allocate energy and plot movement before each turn, then move all of the ships simultaneously. Weapons are fired at will during the turn (i.e., not plotted before-hand like movement). Ships have shields and armor for protection. When these are breached, various ship systems are damaged, potentially crippling the combat capability of the ship, and eventually resulting in ship destruction. Game comes with various scenarios for players to reenact battles from the TV series, or provide for solo play. Re-implemented by: Star Fleet Battles (Designer's Edition) Star Fleet Battles (Commander's Edition) Star Fleet Battles Captain's Edition (Current Edition)