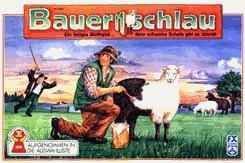 The theme of this game is building sheep farms. Each farmer (player) owns a farm consisting of hexes radiating out from the center of the board, and whose boundaries (and therefore, sizes) are initially undefined. The placement of fences -- each of which is shared by the two surrounding farms -- defines the boundaries. Some hexes are clearly going to be in certain farms; others will be fought over (either to acquire or avoid!) fiercely. The goal is to complete one's own farm by having the fences on both its sides reach the outer edge of the board before the game ends (without which one cannot win), and to have the most enclosed points among all such completed farms (which wins). The sheep are on thick cardboard disks, printed on one side with values ranging from 5 (the best) down to -3. One sheep can fit onto each board hex. On a turn, a player gets to do one of several actions: 1) place a sheep blindly from the supply face-down onto an empty board space after secretly looking at it; 2) turn up a face-down sheep tile in place (thereby freezing it for the rest of the game); 3) use the cool wooden sheepdog to blindly "herd" a face-down sheep from one hex to another, where it is then flipped up and frozen; or 4) lay a fence piece on either of the two fences surrounding his farm. Certain board hexes, symmetrically distributed, act as multipliers for the sheep that ends up in that space. There are a few special situation rules and a few rules governing fence placement. There are strong elements of bluff and memory in this game. The game ends when one player's completed farm is filled with pieces (either face-up or down sheep, or the dog). Whoever has the highest number of points on face-up sheep in his/her farm after applying multipliers is the winner.