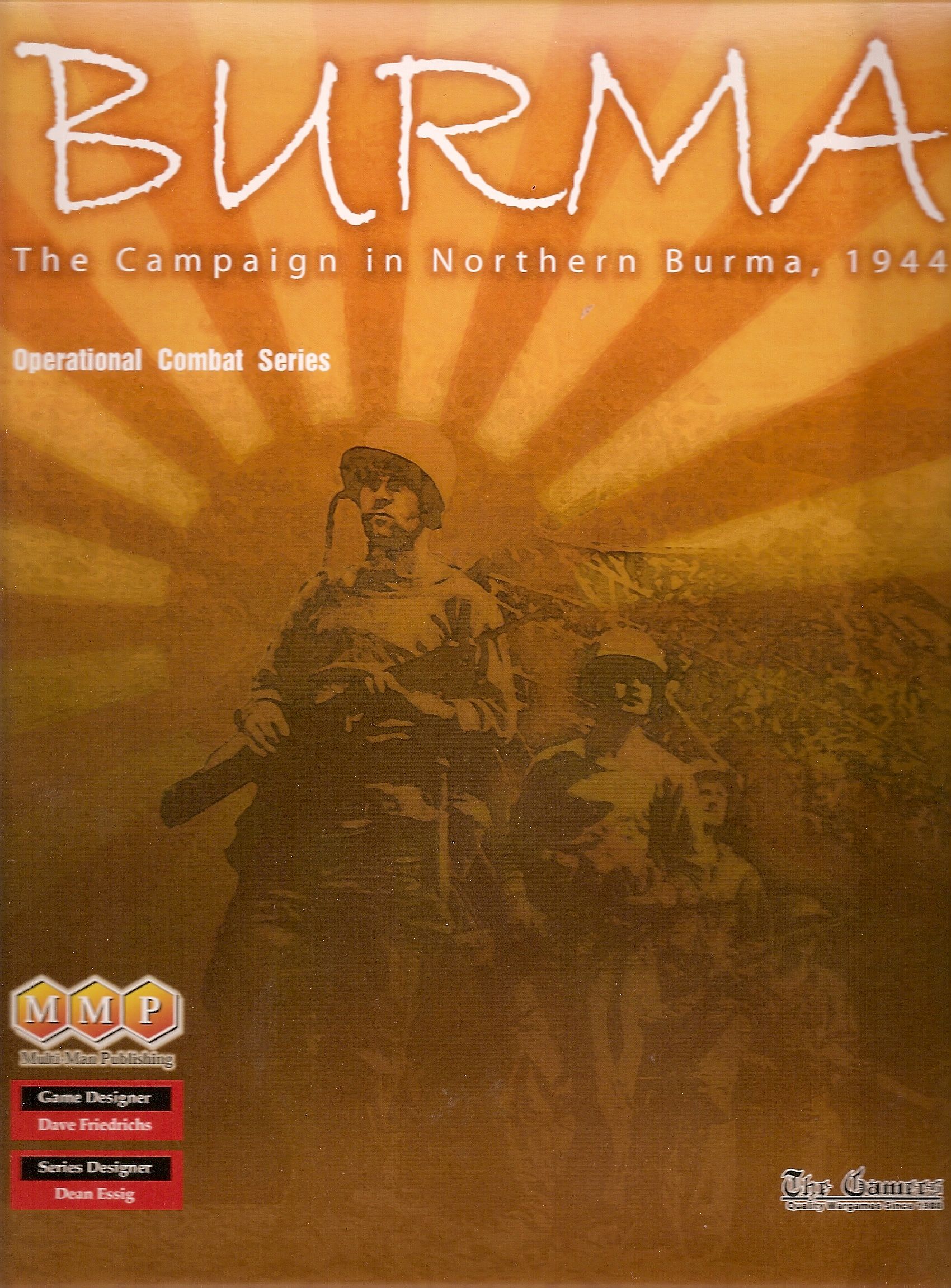 Burma - The Campaign for Northern Burma, March-August, 1944, is the sixth game in the Operational Combat Series (OCS) from The Gamers, and covers covers the 1944 campaigns beginning with the Japanese "U-Go" offensive and ending up as what would be know as Imphal-Kohima, the most dramatic defeat ever inflicted on a Japanese army. In the spring of 1944, two equally matched opponents faced each other in the jungles and mountains of Northern Burma. During that spring and summer, three independent, but simultaneous, dramas unfolded. In the west, the Japanese launched an all-out offensive to capture Imphal. In the center, the Chindits landed in the Japanese rear area. In the east, the Chinese/US forces moved toward Myitkyina against stubborn Japanese defenses. These battles took place in horrible terrain under the most difficult conditions imaginable with troops whose quality ranged from the world’s best to the world’s worst. Burma contains British, Indian, US, and Chinese troops of varying qualities with ample opportunities for both sides to attack and defend. While mainly a British and Indian show, the campaign would end up involving US (Galahad) and Chinese troops as well. Burma is the most markedly different of the OCS games, with a wide variety of unit types and qualities, the extremely dense terrain and lack of roads creating a challenging supply situation for both sides, and a more balanced situation as both sides have opportunities to attack and defend. There is more of the "cool stuff" too, with Galahad, Chindits, Gurkhas, lots of air supply and transport options creating some interesting situations, and the ever-enigmatic and unusual Japanese Army. Imphal-Kohima is by far the most interesting ground campaign of the PTO (from an operational perspective), and it's conversion to OCS is remarkably smooth, with a fairly modest set of game-specific rules. Unlike some other OCS games, Burma has an excellent range of scenarios, from a couple very short scenarios (1-2 hrs) through to a good selection of longer (6hr) scenarios and on up to 3 monster campaign games (30-60 hrs). Scenario Info: Learning Scenario: 1/8th of Map B; 5 turns Short Scenario 1 - Operation Thursday: 1/4 of Map B; 9 turns Short Scenario 2 - U-Go: 3/4 map of Map B; 10 turns Short Scenario 3 - Merril's Marauders: 3/4 map, but requires both maps to play; 24 turns Short Scenario 4 - Sato's Dilemna: 1/2 map of Map A; 11 turns Short Scenario 5 - Imphal: 1/2 map of Map A; 17 turns Campaign Scenarios 1, 2, and 3 (which use both maps, obviously); 45, 41, and 31 turns respectively Game Scale: Turn: 1/2 week Hex: 5 miles / 8 Km Units: Battalion to Division Game Inventory (Burma II - printed 2008): Two 22 x 34" full-color mapsheets Three dual-side printed countersheets (2 combat, 1 markers - 840 1/2" counters) One 48-page OCS version v4.0 rules booklet One 40-page Burma II specific rules booklet Two 4-sided OCS v4.0 Charts & Tables booklets Two 6-sided dice Players: 1 or more (also suitable for solitaire and team play) Playing Time: 1 to 60 hours Complexity: High Solitaire Suitability: Moderate