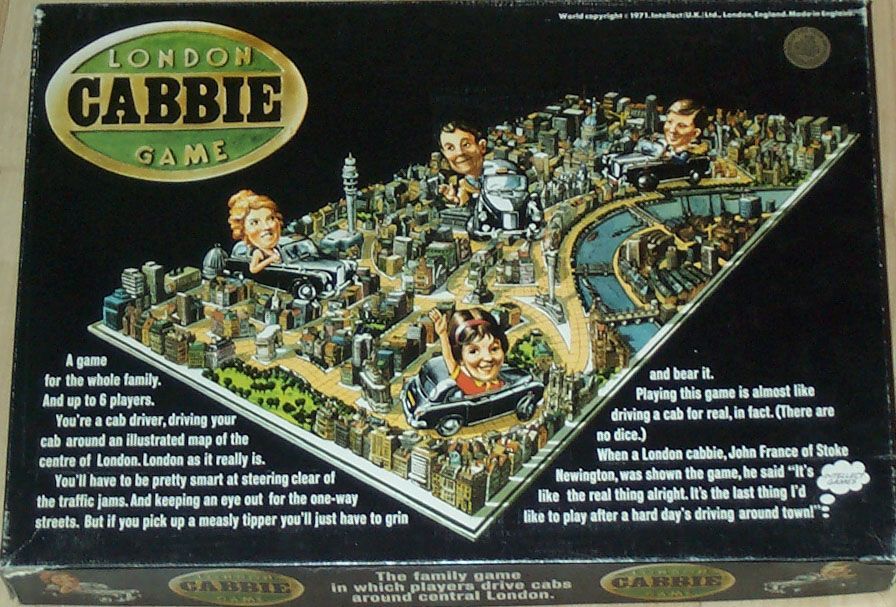 Armed with a cab you travel the twisted streets of London picking and dropping off fares. Each car has 20 points of movement each turn. Passenger cards with the pickup point listed are placed in 5 piles. Any player can pickup any passenger showing. When a passenger is picked up the player takes the card and a new card is turned over in that pile keeping 5 passengers available at all times. You can only have one passenger at a time. Upon picking up a passenger you also draw a destination card and you must drop off the passenger at that location. The fare is paid out from a chart that is very much like the payout chart in Rail Baron. Fares also pay out a small tip. Once a player has obtained 3 pounds (it's a British game) he can add another cab but you still have only 20 movement points to use. The very large board is a true maze of one way and two-way streets. Cabs cannot move through other cabs and this can block streets that only have one lane. There are also 2 traffic jams placed each turn that block areas from movement and this also adds to the mayhem. Because of this the second cab can come in handy as it can allow you to use your full 20 points each turn but it will add to the congestion. The victory conditions are left up to the players. "The winner is the player with the most money earned in a specified time. Say an hour and a half, or two hours. Or a money limit can be set on the game. The first player to make 15 (pounds) or 20, being the winner."