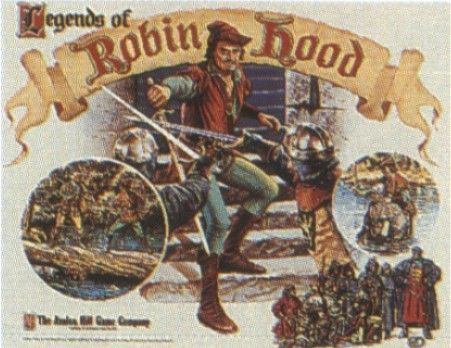 What red-blooded lad hasn't imagined himself fighting at the side of Robin Hood against the evil Prince John and the Sheriff of Nottingham? Cops and robbers, cowboys and Indians, Robin Hood and his Merry Men are all part of a young man's rite of passage from childhood flights of fancy. Long the stuff of screen legend, Robin Hood now lives again in a game format for the entire family. So come with us back to the greenwood in twelfth century England as our heroes Robin, Little john, Friar Tuck, Will Scarlet and Allan A’ Dale scour the countryside with quarter staff and long bow rob the rich and save the poor from the oppressions of nobles and clergy. Each player assumes the role of an outlaw clad in Lincoln green and tries to outdo his fellows in amassing the most gold by winning archery contests, recruiting stout yeomen, or robbing wealthy travelers. But beware; the woods are full of the Sheriff's men. Ambushes by Prince John or Sir Guy of Guisbourne could land you in irons in a castle dungeon. Play is extremely simple as each player maneuvers his band across the map using playing cards that both dictate the action and define the sequence of play with little or no reference to the rules. Yet, strategy is important. You can opt to stick to the relative safety of the woods and dine on the King's deer or don a disguise to sneak into Nottingham Castle to cudgel the Sheriff himself.