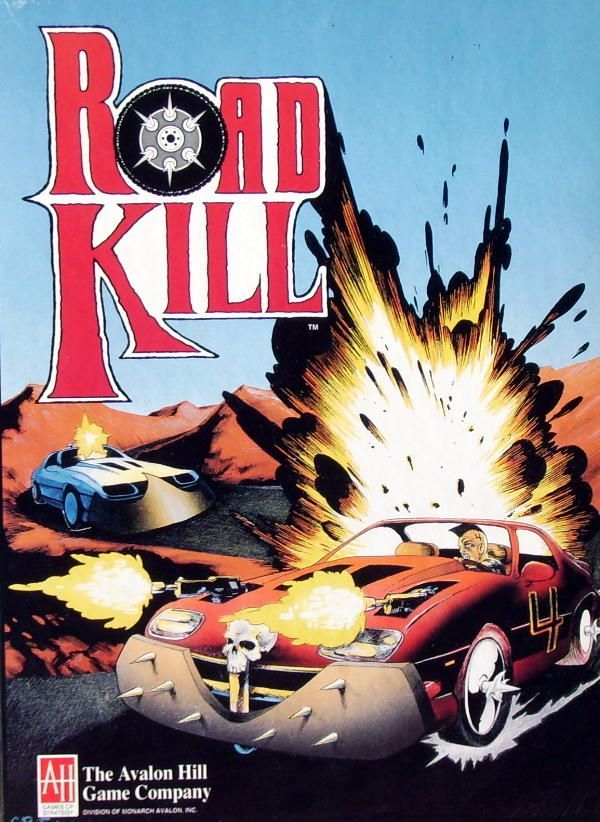 Description text from the back of the game-box: Cross-Country Demolition Racing in the 21st Century (or "Armored Leapfrog" as it’s adherents refer to it) brings visions of Mad Max in all his infinite glory to your tabletop in an easily played card game format. Each player competes in an armored racer equipped with an assortment of "accessories" not commonly found in your average Auto Parts store. Road hog won't let you pass? No problem… debate the right of way with a burst of your front machine-guns. Annoyed by that tailgater? …a few well-timed grenades should scrape him off your bumper. Reckless passer? …well, if your smoke screen doesn’t discourage him, a nudge from your scythe-blade hubcaps should do the job. And these are just the "standard" accessories. In the Advanced Game, you can customize your car into something even James Bond would envy. Running low on fuel … better pull into the next Rest Stop, but beware of sabotage or theft. Only losers nap during RoadKill. Besides, what better time to salt the track with tire spikes or change a road sign or two. Everything goes in Roadkill, an uproarious game of highway combat more vicious than the Santa Monica Freeway. Players vie for the lead so they may lay the next section of the course. For example, a player with a Nuclear Fuel Cell will want to lead the others on a merry chase through mountainous terrain to sap their fuel. However, someone already running on fumes will opt for a desert straight-away to finish the race before he must pit and relinquish the lead. But pole position has its price - attracting more than its share of misfortune, while slipstreaming provides opportunities back in the pack. As if the players don't heap enough mayhem upon each other, the game throws an endless series of monkey wrenches into play as cars breakdown, the road widens and narrows or comes to a temporary stop in a blizzard, rock slide, or drawbridge (or does it?). You never know what is around the bend in Roadkill.